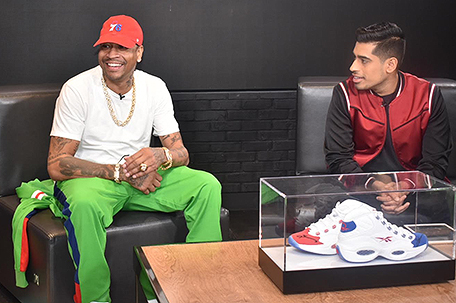 Reebok and Foot Locker pay homage to “the Answer” with a new question.

To celebrate the legacy of iconic NBA basketball player Allen Iverson, nicknamed “the Answer,” Reebok launched a remix version of the classic Question Mid. The new Question Mid Double Cross sneaker became available worldwide on October 23, but only one store had Iverson in attendance.

The new sneaker features the red and blue colorway that Iverson wore in his rookie season. This symbolizes his unforgettable on-court “cross-overs” and his fashion forward influence.

The former 76er couldn’t think of anywhere better to be to celebrate the worldwide release other than in Philadelphia — the city that was once a place where he called home.

In his honor, the Footlocker community store in Wyncote held an interactive event with food and flair which was open to the public, featuring the new Reebok Question Mid Double Cross X sneaker and Allen Iverson. It was hosted by Gillie the King.

Allen Iverson fans waited nearly two hours to meet the cultural icon and to win a chance to go to the 76ers home opening game at the Wells Fargo Center. Until his arrival, people were in the store just having a good time. Some were playing arcade classics and popular videos games. There was lots of dancing. Younger fans opted for tossing hoops, and it seemed as if everyone was enjoying Whimsicle gourmet fruit popsicles.

The first 25 people to buy the Question Mid Double Cross shoe received access to an exclusive meet and greet with Allen Iverson himself and was entered to win a pair of Philadelphia Sixers tickets. According to Footlocker representatives, the Wyncote store was the only location Iverson visited  that day for the new sneaker launch.

“Reebo Question Mid Double Cross is actually launching across the country today,”  said Sarah Houseknecht, director of public relations, Footlocker North America. “We thought there was no better place to celebrate than in Philadelphia with Allen Iverson himself.

So it all nicely correlates with the first home game of the season for the 76ers. We really just wanted to celebrate in our community power store here today with the man of the hour.”

Philadelphia is also special to Footlocker because it is the second city in the country to have a community powered store. The company has only three community stores in the US. These stores focus on being a platform in designated areas where people can celebrate the good things that are occurring in their local neighborhoods. The other two are located in Detroit and Harlem. Philadelphia rolled out its power store model late last year.

“This store opened in February of this year, so it’s a concept that we’re trying, that offers full family [products], men’s, women’s and kids,” Patrick Walsh, vice president of marketing Foot Locker North America, said. “It also incorporates an activation space which is what you see going on here today. So it really creates a hub for people who enjoy youth culture and sneaker culture to come together and celebrate that on a regular basis. We want our store to become part of the community where people actively come and do stuff they love from sports to art to music. You’ll really see a variety of different events and activations.”

“All I wanted to do was play harder than everybody,”  Iverson said during a live interview with host Omar Raja of House of Highlights. “I never thought I’d play with Kobe and Shaq. Philly is an authentic place. It’s humbling for me to think that I could be a cultural icon. Michael Jordan did that for me. He made me think I could be who I became.”

“When Allen Iverson became a player for the Philadelphia Sixers, he brought a whole different type of excitement to this city,” King, co-host of the music podcast “Million Dollars Worth of Game” and emcee for the evening, said. “He changed the whole landscaping of basketball with the way he dressed, carried himself, and his attitude. You know, he brought hip-hop to basketball so just to be here and be a part of this beautiful situation is a happy feeling.”

Gillie said he and Iverson are good friends, more like brothers. He also said that Philly is doing what they should be doing, which is representing one of the G.O.A.Ts (greatest of all time) that ever did it for Philadelphia.

“Iverson is a part of Philly community and it’s important that we continue to celebrate him and his legacy, and we’re able to do that today with our partner Reebok,” Walsh said.

Allen Iverson back in Philly tonight, eager to please fans