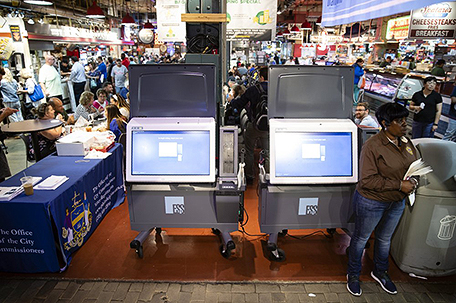 HARRISBURG — A federal court was asked last Tuesday to force Pennsylvania to rescind its certification of a voting machine newly purchased by Philadelphia and at least two other counties in the state ahead of 2020’s presidential election.

The filing casts doubt on how 17% of Pennsylvania’s registered voters will cast ballots in the April 28 primary election, as well as next November, when the state is expected to be one of the nation’s premier presidential battlegrounds.

The plaintiffs say certifying the system violates their agreement, in part because the machine does not meet the agreement’s requirements “that every Pennsylvania voter in 2020 uses a voter-verifiable paper ballot.”

For one, the ExpressVote XL counts votes by counting machine-printed barcodes on paper, a format that is neither readable nor verifiable by an individual voter, they wrote in court papers.

Second, the ExpressVote XL does not use a “paper ballot” and relies on software to record the voter’s choice, they wrote.

Third, it is not capable of supporting strong pre-certification auditing of election results because its paper records may not accurately reflect voters’ intent, they wrote.

The chairwoman of Philadelphia’s city commissioners, who oversee the city’s elections, declined comment through a spokesman last Tuesday.

In addition to Philadelphia, the machines were bought by Cumberland County, with a plan to use them in April, and by Northampton County, where the machines were blamed for election-day problems earlier this month.The initial lawsuit, filed after 2016’s presidential election, had accused Pennsylvania of violating the constitutional rights of voters because its voting machines were susceptible to hacking and barriers to a recount were pervasive.

Wolf’s administration settled the lawsuit in part by affirming a commitment it had made previously to push Pennsylvania’s counties to buy new voting systems that leave a verifiable paper trail by 2020.

Earlier this year, Wolf’s top election official told lawmakers that failing to replace those machines by 2020 would leave Pennsylvania as the only battleground state without voter-verifiable paper systems.

Shortly after polls closed on Nov. 5, Northampton County election officials found that the touchscreen machines had badly undercounted the returns for one candidate in a judicial race. Election workers counted the vote on paper ballots, resulting in that candidate being declared one of two winners, by a 1,054-vote margin.

In a statement issued last Tuesday, ES&S said the ExpressVote XL has been through hundreds of thousands of hours of testing, and was certified by the Federal Election Assistance Commission, in addition to Pennsylvania.“By all accounts, it meets and exceeds the highest standards for security, accuracy and accessibility,” the company said.