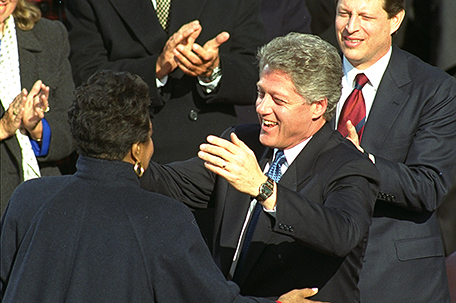 ABOVE PHOTO:  The inaugural poet--President Bill Clinton gets ready to hug poet Maya Angelou on Capitol Hill in Washington in 1993, after she recited a poem, “On the Pulse of the Morning” for his inauguration. Vice President Gore is at right. Poets and poetry lovers around the country are hoping that Barack Obama, known for his own skillful use of language, will be the third president, John F. Kennedy and Clinton were the others, to include a poet in his inauguration.  (AP Photo/Amy Sancetta)

“I mourn the passing of Maya Angelou, but she has left us so much; her poetry, wisdom and her brilliance. She was a national treasure and we as a nation were made better by all she shared with us.”

“I am saddened to learn of the loss of Maya Angelou. Dr. Angelou was an impressive advocate for many people and causes, and an inspiration to all who read her celebrated works. She was one of the great American artists, activists, and educators of our time; a skilled writer and storyteller whose gifts carried her career across the world.

“Later in life, Dr. Angelou was an outspoken supporter of Alzheimer’s research and the National Institutes of Health’s Alzheimer’s Disease Neuroimaging Initiative (ADNI). As the face of the ADNI campaign, she inspired individuals—especially in the African American community—to take part in the study, designed to build a greater understanding of Alzheimer’s disease. Her efforts to single out Alzheimer’s reflected her lifelong commitment to causes that would strengthen this great nation.

“She will be mourned and forever missed, but her legacy will live on through a body of work that continues to inspire and motivate millions around the world. She was truly a phenomenal woman.”

“…This morning we as a Nation experienced the loss of America’s Poet, Maya Angelou.  During her lifetime, she left an indelible mark on American society.  Whether you are a poetry fan or a particular admirer of African-American literature, Maya Angelou spoke to so many people through her work.  I’ve been a fan and admirer of hers for a long time, and I am saddened by her passing.  I heard her recite, in person, “On the Pulse of Morning” for President Bill Clinton’s Inauguration, and I was moved by her presence and her presentation.  I also had one occasion to actually meet her, when she received the Marian Anderson Award in 2008, which was particularly special to me.

“Maya Angelou was a great woman, and for me, a very powerful black woman; a role model.  She was, in fact, the inspiration for me to begin thinking about the City of Philadelphia having a Poet Laureate.  Her words, her literature, and her presence will never leave us.  My hope is that there will be a whole new wave of Maya Angelou fans created today and that school across America will take a moment to reflect and read some of her great work…”