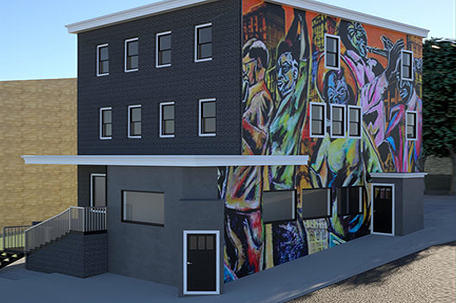 ABOVE PHOTO:  Conceptual design mock-up of the finished project and mural.  (Photo courtesy Trades for a Difference website)

It’s a scenario being played out in major cities around the country.

Philadelphia’s working-class neighborhoods and former industrial areas — especially those closest to Center City — have been facing sustained development and gentrification as young professionals eschew the suburban communities in which they were raised to create new businesses and live closer to the jobs and entertainment enclaves and create new businesses.

But what about the “middle” neighborhoods, those neighborhoods that are neither the most distressed nor the strongest in the city? How are these neighborhoods—and the stable tax bases they’ve long provided for the City of Philadelphia—faring under the weight of this new reality?

The fate of “middle neighborhoods” in the wake of this increase in development and how that fate might impact the city as a whole was the subject of a recent hearing held by Philadelphia City Council’s Committee on Housing, Neighborhood Development and the Homeless. State Rep. Chris Rabb (D-200th Dist.) joined City Councilwomen Cherelle Parker (D-8th Dist.) and Cindy Bass (D- 8th Dist.), all of whom represent the “middle neighborhoods” of Northwest Philadelphia took part in this hearing.

Of the $4.34 billion in revenue that makes up Philadelphia’s 2018 budget,18.5 percent of it is generated from residential property taxes while 45 percent of it comes from the city’s wage tax, Councilwoman Parker said.

Many of the taxpayers in both of these samples come from the city’s “middle neighborhoods.” 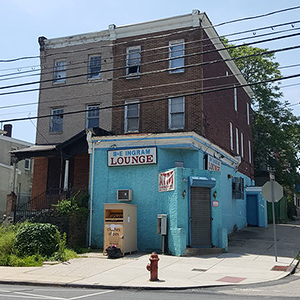 Because of their relative stability, lower crime rates, and physical attractiveness —among other positive attributes — they have been targeted by developers in Philadelphia’s latest wave of mass gentrification.

The most recent recession — coupled with the current gentrification trend — has exacerbated a decline that has made it difficult for long-time residents to thrive within these middle neighborhoods, Bass said.

“[In middle neighborhoods] you may have seniors on fixed incomes but doing well, while another neighbor in her 40s, struggling to pay tuition who just lost her job,” she said.

In many cases, the process (or disregard thereof) is more problematic than the proposed property development or acquisition itself, Bass said.

“It is critical for developers to speak with residents [particularly] in African American neighborhoods, [because] there is a sense that you can do whatever you want in them,” Bass said.

A case in point was the proposed TerraVita Holistic Centers’ medical marijuana dispensary in Mount Airy, one of Philadelphia’s best-known middle neighborhoods.

Officials and community members weren’t consulted about the project until the TerraVita was given permission from the Pennsylvania Department of Health. Residents living near the proposed clinic felt railroaded and officials demanded a solution that took residents into consideration.

After a public hearing in which residents spelled out their objections to the dispensary, TerraVita has since received permission to take its dispensary elsewhere.

“This is obviously great news for the community, which was never opposed to medical marijuana but did not want a dispensary in their residential neighborhood,” Bass said. “I’m ecstatic that we found a solution that could work for everyone.”

“I share my neighbors’ concerns about the proposed dispensary site, and agree that this business is not appropriate for a quiet, densely populated residential area,” Rep. Chris Rabb said. “As a strong supporter of medical cannabis, to quote one of my neighbors, my position has been from the beginning: ‘good stuff, bad location.”

Some residents of middle neighborhoods are taking advantage of the development trend in their communities by investing in development and spearheading rehabilitation projects themselves.

“We see some areas are being developed, that have houses going up,” Robert Williams, an independent accountant/consultant affiliated with MBS Corporation who specializes in business development. “ We [long-time African American residents] can be envious of that, but while we are doing that, we can look at areas where no one else is paying attention.”

Williams — who is part of a private African-American development group with eight other investors — feels that opportunities for long-time residents to participate in the current boom in some capacity are there for the taking if they join together, pool their resources, plan carefully and consult experienced, professional leadership.

“[For example], I’m looking at certain sections of Southwest[Philadelphia] that have always been relatively decent,” Williams said. “Even if we develop a block of houses that sell for as little as 75 to 100K, if you’ve got 100 of them — do the math.”

“It’s about partnerships and being clear,” Williams continued. “It’s about putting on the board ‘okay, to develop these properties is going to take about 500K; everybody can contribute their piece [in order to] get to that number, then go to the bank as a collective’…that’s how most development around the city is happening.”

There are also some grassroots efforts.

Mount Airy-based Trades for a Difference (TFAD) is a community-based, non-profit organization that provides training in building trades and life skills, as well as mentoring for young men aged 16 through 24. After the young men are trained in carpentry, electrical, plumbing, and construction management, they participate in the TFAD blight removal workforce program, said Jordan Parisse-Ferrarini, TFAD’s founder.

“We target blighted properties within communities…properties that are in need of reconstruction or repurposing,” he said.

Parisse-Ferrarini, 30, who holds multiple trade licenses and certifications and was named one of the National Kitchen and Bath Association’s “30 under 30”— understands the needs of Mount Airy, something that shows in TFAD’s latest project.

“This year’s [main] project was a former community nuisance bar [located at Chew and Meehan Avenue] which was in mid-construction of being converted into a “Stop and Go” deli, which the neighborhood definitely didn’t need,” Parisse-Ferrarini said. “It all happened relatively quickly. They [the deli owners] had their “in construction” notice posted on the window, so some of the neighbors started to get wind of it; I was in the loop on that as well. We acted pretty fast, and were able to get them to part ways from the building by purchasing it from them.”

“We are now repurposing it as a youth hub which will be operated by Trades for a Difference,” he continued.

“It will be a place of prosperity, where we are going to offer all types of different educational programming, seminars, workshops, focus groups, anything that is conducive towards growth and development.”

It is important to the organization to prioritize the needs of the neighborhood’s long-time residents.

The rise of the technological age has transformed the way we work, as more traditional jobs are phased out or consolidated. This trend — which shows no sign of slowing down — also has a direct impact on residents of Philadelphia’s middle neighborhoods and their future earning potential, especially those who have been struggling to maintain a certain quality of life in these areas, Bass said.

A steady, stable income is crucial for maintaining homeownership and staying on top of rising property tax rates. If this trend is not addressed proactively, it will exacerbate the tensions in the current gentrification situation, creating huge financial and skills gaps between many original residents and their new neighbors.

“We want to see people invested and engaged wherever possible,” Bass said. “The way we work has changed…we have to keep pace with technology. One thing I can do as an elected official is to make sure that there is internet access for everyone.”

Bass has introduced a resolution in City Council requesting hearings on the feasibility of a program where the Free Library of Philadelphia’s could offer free mobile wi-fi hotspot access to its cardholders. This would help those without current online services to keep pace with a rapidly changing economy.

“One common misconception is that [all of] those living in middle neighborhoods have access to the internet; well, no, they do not,” Bass said.

Bass said that getting to know one’s neighbors and becoming engaged in what is happening in these communities has become more important than ever as development from outside interests increases.

In spite of a long-standing tradition of community groups, the rapidly changing landscape of Philadelphia’s middle neighborhoods demands that cooperation between these groups and other concerned residents is essential.

“I think one of the most important things neighbors have to do is get organized,” Councilwoman Bass said. “Traditional grassroots organizing in low-income neighborhoods is very common. We forget about middle neighborhoods [in the process].”

Gentrification In The City of Neighborhoods

These two Black entrepreneurs are fighting gentrification — one house at a time!