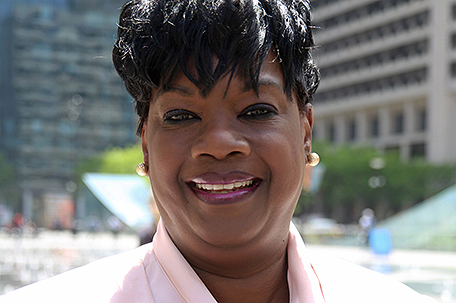 ABOVE PHOTO: Vanessa Garrett Harley, Deputy Mayor for the Office of Children and Families (Photo/phila.gov)

PHILADELPHIA — The City of Philadelphia is asking a judge to force Pennsylvania’s Department of Human Services to take custody of more than 70 juveniles sentenced in court to state rehabilitation programs, hoping to alleviate what it says is dangerous overcrowding at the city’s holding facility.

In the lawsuit filed last Friday, city attorneys said the state has refused to prioritize transferring juveniles from the overcrowded juvenile justice center. The city is asking a judge to mandate that the state take the sentenced juveniles within 20 days and either contract with a private or public facility or open a state-run facility to handle the increase in youths being sentenced to state centers.

Workers from Philadelphia’s juvenile facility spoke last week at a City Council hearing about worsening conditions at the center that’s designed to temporarily hold up to 184 youths between the ages of 10 and 17 who are awaiting court proceedings. But as of last Friday, the lawsuit said the center had reached 223 juveniles — 74 of whom had been sentenced to state facilities and were awaiting transfer.

A spokeswoman for the Pennsylvania Department of Human Services declined to comment on the litigation Monday. In a statement issued after the City Council hearing last week, department officials said the state’s facilities are also at capacity.

“There is not refusal to serve — the issue at hand, is the need to maintain safe operations at our facilities as well,” department spokeswoman Ali Fogarty wrote.

The statement noted that the department can’t unilaterally discharge juveniles at its state treatment units to make room. It also placed responsibility on counties to contract with private or public entities to house the juveniles until they are transferred if they need more space.

But Philadelphia officials said they’ve been asking for help for almost three years.

“For too long, the Commonwealth has been derelict in this fundamental duty. The city, in good faith, pleaded with state officials to fulfill their obligations and avoid the crisis we are now seeing,” Vanessa Garrett Harley, Philadelphia’s deputy mayor for the Office of Children and Families said in an emailed statement Monday. “As months passed, unfortunately, no meaningful action was taken on their part and empty promises were made.”

Staff at the facility said more than 20 juveniles are currently sleeping on mattresses on the floor in the admissions portion of the facility, which is not designed to house them. They also said the increased population combined with a staffing shortage has meant children have not been able to leave their cells or housing areas for school, for meals or for recreational time because moving them around the facility has become dangerous.

In the lawsuit, city attorneys said in 2019 the state took on average 20 days to transfer youths, but many of the 74 juveniles awaiting transfer have been waiting for four to five months. And juveniles waiting to be transferred are not receiving credit toward their sentence.

Unlike adults who are sentenced to a specific incarceration term, juveniles are sentenced to complete rehabilitative programs like anger management, drug or alcohol treatment or other programs. Those can take sometimes three or six months to complete, but the city’s holding facility does not run those programs.

The lawsuit said city officials have been trying for close to three-years to work with the state to address the overcrowding, but the issues came to a head in early October when juveniles held in the highest security area overpowered staff and forced their way into a common room. Staff said the fight left more than a dozen employees and at least one resident with injuries — some severe — and police had to be called to help disperse the juveniles back to their units.