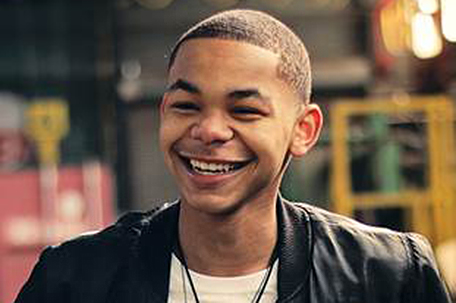 Since its original broadcast on September 12, 1987, “Showtime at the Apollo” has been a source of tremendous talent.

The reboot of the talent search competition, hosted by Steve Harvey, allows contestants to showcase their skills while simultaneously leaving their fate in the hands of the audience. The audience loved what they saw and heard from Philadelphia native, 16-year-old Cam Anthony. Anthony made his Apollo debut on March 29th, performing Ed Sheeran’s “Thinking Out Loud.”  His performance earned him a spot in the season finale.

On May 24th, Cam’s rendition of Bill Withers “Ain’t No Sunshine” secured him a win for the entire season and a headlining show at the Apollo. Anthony sat down with the SUN for a peek into his world and to see what life is like for the Apollo champion.

Cam grew up in North Philadelphia.  He developed a love for music and undeniable skills at a very young age. With the help of his mother, who posted him performing cover songs on YouTube, the world began to take notice of Anthony’s talent. He quickly became a YouTube sensation, which led to him performing on “The Ellen Show” and twice at the White House Easter Egg Roll. Fast forward to today, Anthony’s charm, incredible voice and seasoned stage presence earned him the crown at The Apollo.

“The Apollo was a really big thing!”  he said. “It was definitely something that I always wanted to do and the fact that I was able to accomplish that so soon was really exciting and a blessing. Since I won the Apollo, now we’re just trying to figure out when the headlining show will be and working out those details.”

Cam has been signed to Dr. Dre’s Aftermath Records since the ripe age of 12. He manages to balance school and his career seamlessly, describing his current status as a homeschooled student of Reach Cyber Charter School as “senior-ish”. He is currently working on a 14-song album as well as a project in South Africa set to begin later this month.

Cam described the sound fans can expect from the album as an eclectic hybrid.

“I like to really explore and learn from different styles of music and different types of singing, so I like to incorporate that into my music,” he said. “As an overall view, of believe I can be categorized as a mixture of Hip-Hop, R&B, Urban and Soul is definitely in there.”

Cam’s soul-infused vocals — paired with his work ethic and old soul — will undoubtedly set him on a path to longevity. He opened up his personal goals for his career and what he’d like to see change in the music industry.

“I’m working on my album, I’m working on content for my social sites and I’m just really excited to be sharing my gift with the world,” he said. “I want to change the way that people see the music industry right now because sometimes it can get a bad rep. I’m definitely trying to change the way that people see, hear and feel music. When Michael Jackson was alive, Prince, Whitney Houston… the greats… when they were making music people, were able to feel music and actually understand it. The lyrics nowadays are crazy, so I’m just trying to bring back the originality. I want to add to the few people that are actually doing the work of making music for people to relate to and feel… I want to make that popular again.”

The only way for Cam Anthony to go from here is onward and upward… continued success is sure to come. Stay tuned for his headlining show at The Apollo and stay up to date on everything he’s doing by visiting: www.therealcamanthony.com.