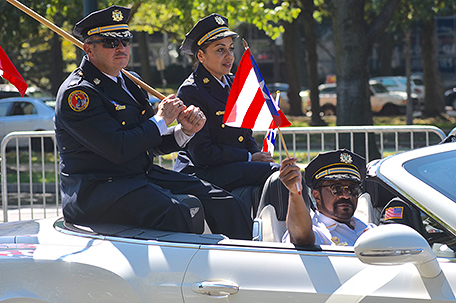 ABOVE PHOTO:  Riding in the car in the parade are: Inspector Michael Bastone, Deputy Chief Jennifer Algarin-Barnes and Sheriff Jewell Williams (sitting).  (Photo courtesy: Office of the Sheriff, Philadelphia)

It was the third time Sheriff Williams participated in the parade. 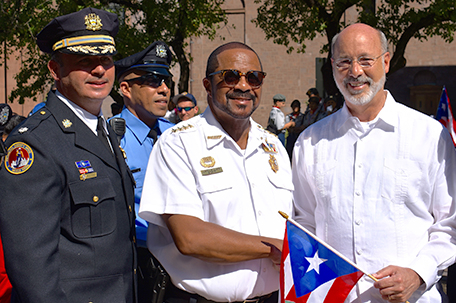 Since taking office in 2012, Sheriff Williams has promoted several Hispanics to the ranks of deputy chief, inspector, lieutenant and Sergeant — the first time in the 300-year history of the office that Hispanics have held officer ranks.

Right now, Hispanics make up more than 15 percent of sheriff employees out of a total of approximately 300.

“This was both a great day, and a somber day for the island of Puerto Rico and its residents, as well as family and loved ones living on the mainland,” said Sheriff Williams.

“The destruction left behind by Hurricane Maria has touched this office personally as many of the relatives and friends of our officers are still there,” he said.  “At this time of celebration and honor, we also send prayers of comfort and support to help them through this current challenge.”