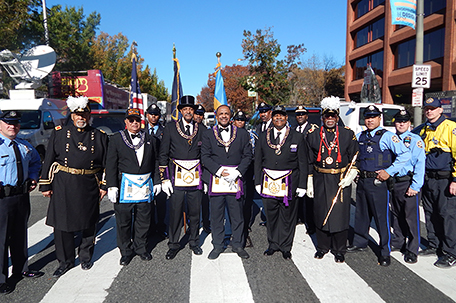 The awesome responsibility of leading the first Official Veterans Day Parade was given to the Honor Guard Unit of the Office of the Sheriff of Philadelphia City and County who led veterans and their supporters on a beautiful Sunday morning.

“We are so very, very proud and humbled to have our Honor Guard Unit lead off this first Official Veteran’s Day Parade to honor those men and women who sacrifice so much simply for the love of country and family,” said the recently re-elected Sheriff Jewell Williams, who also marched.

“Our Honor Guard Unit has marched in, and led, other parades, but this is something so special and solemn that it’s hard to form the words to convey exactly how much we respect and appreciate this responsibility,” said Inspector Paris Washington of the Sheriff’s Office.

Veteran’s organizations and others from New Jersey and Delaware also participated in the parade.