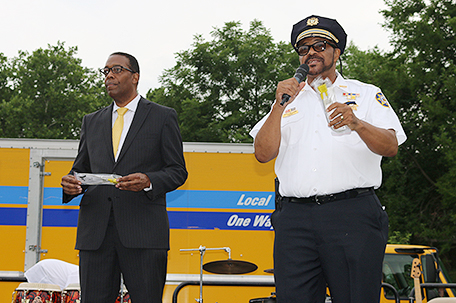 ABOVE PHOTO:  City Council President Darrell Clarke and Sheriff Jewell Williams speaking of the importance of gunlocks at a community event.

Sheriff’s deputies will fan out across the city on December 15 from 2PM to 4PM to pass out gun safety locks to Philadelphia residents and gun safety pledge cards to children to make them aware of the danger of firearms in general, and specifically unsecured firearms.   Deputies will be at the following areas:  Broad & Chestnut Streets, 52nd & Market Streets, 22nd Street & Lehigh Avenue, Bridge & Pratt Streets, Broad Street & Olney Avenue and 24th Street & Oregon Avenue.

Guns kill nearly 1,300 American children every year.  In West Philadelphia, a three-year old girl shot herself in November after finding a loaded, unlocked gun belonging to her father.  It was the third accidental shooting involving children in the previous three months, including a three year old boy who accidently shot his uncle after finding a gun in the family car in Center City, and an 11-year-old boy shot himself in the face in South Philadelphia.

A 2014 report from the Children’s Hospital of Philadelphia Research Institute cites the US General Accounting Office estimate that 31% of accidental firearms deaths could be prevented if gun owners used two devices:  a gunlock and a loading indicator.

“We know that some of these tragic events could have been prevented by making sure these firearms are secured and stored safely,” said Philadelphia Sheriff Jewell Williams. “If you have a gun, you need a lock”.

(Statistics from Children’s Hospital of Philadelphia Center for Injury Research and Prevention.  For full report, go to https://injury.research.chop.edu/violence-prevention-initiative/types-violence-involving-youth/gun-violence/gun-violence-facts-and#.WifpC0yZPdQ )

The Sheriff’s Office, in conjunction with City Council President Darrell Clarke, have been giving away free gunlocks throughout 2016 and 2017.  No questions asked.  No ID required.  Philadelphia residents can pick up free gunlocks at the Sheriff’s Office any weekday from 9 a.m. to 4 p.m., 100 S. Broad Street on the 5th floor.  For more information call 215-686-3572 or visit www.phillysheriff.com.