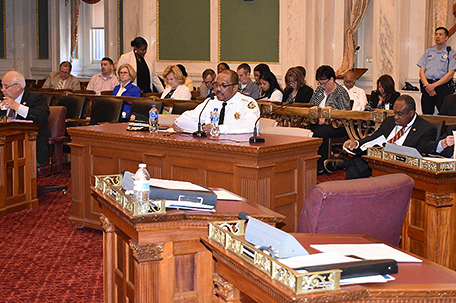 “In the coming year, the office will pay to the City nearly three times our cost,” Sheriff Williams stated during his budget testimony.

The $61 million dollars in 2017-18 taxes and fees is nearly three times the cost of the operation of the Sheriff’s Office. The proposed budget for the 2018-2019 fiscal year is $24.5 million. It supports 408 employees including 314 uniform personnel.

The budget allocates 54 percent or $596,000 for the transporting and provisions of 87,030 prisoners in the care of the Sheriff’s Office.  Sheriff’s deputies now secure City Hall; training was completed for a new 40 officer warrant squad and both the bicycle and K9 units were expanded. Sheriff’s deputies served 4,412 warrants and approximately 300 Protection From Abuse orders.

The Sheriff identified and returned a record $3.3 million dollars in excess recovery funds to individuals who lost their homes to foreclosure or tax delinquency.

Outreach and advertising served to greatly increase the number of participants in four monthly sheriff sales. The office conducted 36 seminars teaching citizens how to buy a property through the sheriff’s sale. The attendance at these seminars has increased sharply, indicating more demand for properties and interest in this method of purchase.  This year, 19,919 properties were ordered to sheriff sales; ultimately 5,936 properties were sold, others were stayed or postponed.

The Sheriff has also committed resources to a critical public safety outreach initiative. The office has distributed 5,000 gunlocks to Philadelphia citizens in an effort to prevent childhood gun accidents in our homes.

City of Philadelphia to collect delinquent taxes from pensioners