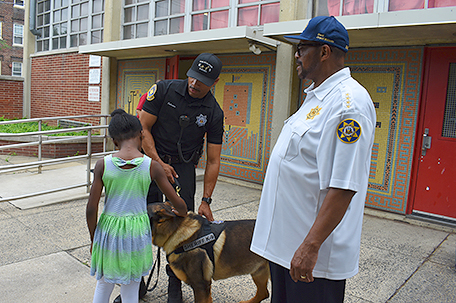 ABOVE PHOTO:  Sheriff Jewell Williams and Deputy Sheriff Officer Barry Johnson look on as K-9 Carter interacts with a student from the Powell Elementary School. (Photo: Office of the Sheriff, Philadelphia)

Sheriff Jewell Williams will urge youngsters to have a peaceful summer as he visits children’s programs this summer.

The Sheriff will “deputize” children who take a gun safety pledge as part of his Summer of Peace initiative.  At the end of the 2016-17 school year, Sheriff Jewell Williams visited several schools to spread the summer of peace message.   The Sheriff and Canine Carter—a member of the Sheriff’s K-9 unit—visited the Greenfield School and the Powel School to educate students about how to “stay cool” when they encounter conflicts and what to do if they find a gun at home or in their neighborhood.

“Be respectful, don’t bully and most importantly if you see a gun DON’T TOUCH IT,” Sheriff Williams said.  “Immediately tell a parent, a nearby adult and if you are alone in a home call 911.”

The Children’s Defense Fund tells us that a child or teen dies by gun in the United States every 3 hours and 8 minutes.  Having a gun in the home makes the likelihood of accidental death four times higher and more than half of youths committing suicide by gun found it at home, and usually belonged to the parent.  A recent study by the American Academy of Pediatricians indicates “Nearly 1,300 children die and 5,790 are treated for gunshot wounds each year.  Boys, older children, and minorities are more likely” to fall victim to gun violence than others.  In 2015, 42 percent of gun deaths were among Black children and teens.

“Don’t be a statistic,”  Williams told the children when introducing Canine Carter to students at the Samuel Powel School in Powelton Village.     “Use your mouth, not your fists or weapons, to settle differences.  Don’t let things escalate”.

The Sheriff will be pressing this message during the months when youngsters may find themselves on the streets in tense situations:  “In the warm weather months things can easily heat up.  Giving kids the message they can keep themselves safe or prevent a crime is powerful and maybe if they hear it often enough they will practice what we preach.  Summer is a time for fun, visiting the beach, having picnics and barbeques… I want them to stay cool in every way and help us all to have a summer of peace.”

As part of the Summer of Peace activities, the Sheriff is reaching out to groups of children at church and summer camps to take the following gun safety pledge:

Throughout the summer, the Sheriff’s office will carry its safety message to outdoor festivals, summer gatherings, children’s programs and block captains.

The Sheriff and City Council President Darrell Clarke began the gunlock program in August of 2016.  To date, more than 3000 free gunlocks have been given to Philadelphia families through the Sheriff’s Office and City Council offices.   Philadelphia residents can pick up free gunlocks at the Sheriff’s Office any weekday from 9 a.m. to 4p.m., 100 S. Broad Street on the 5th floor.  For more information call 215-686-3572 or visit www.phillysheriff.com.