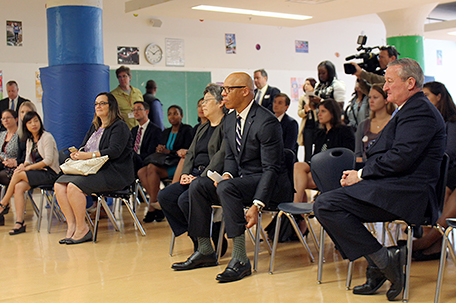 ABOVE PHOTO:  The launch announcement, which was attended by Mayor Jim Kenney (right) and Superintendent William Hite (center right), was held at the Folk Arts Cultural Treasures (FACTs) Charter School in Chinatown.  FACTs is one of the first grant recipients from the Great Schools Fund II, with a $300,000 grant to support the first phase of a five -year expansion plan.

Having invested $80 million since 2011 to improve educational outcomes for Philadelphia’s children, the Philadelphia School Partnership (PSP) today announced the creation of Great Schools Fund II, an ambitious new $60 million fundraising campaign that will build on and accelerate progress already made in transforming schools of all types in the city.

The Fund seeks to expand educational opportunities for low-income students in four ways:

In announcing the new campaign, PSP leaders reported that $15 million already has been pledged for Great Schools Fund II from individual, foundation and corporate donors. While Fund II’s core activities will mirror Fund I, several strategic shifts will draw from lessons learned in the past six years. These will include investments in capacity building and technical assistance to ensure that portfolio schools grow in skill as well as size; increased investments in teacher development and retention initiatives; and diversification of the Fund portfolio to include schools offering both career and college pathways. PSP invests in schools of all types – charter, district, private and parochial – with a primary focus on supporting leaders and operators with a track record of success.

“With the launch of our second fund, we are doubling down on our efforts to expand educational opportunity for tens of thousands of Philadelphia families,” said PSP Executive Director Mark Gleason. “We are applying the lessons we have learned over the last six years and committing to work more collaboratively to achieve our ultimate goal – making sure that all children in this great city, regardless of where they live, have access to a great school.”

Since its creation in 2011, PSP has invested to improve outcomes for more than 25,000 students in 50 different schools located in nearly every neighborhood in Philadelphia.  The new fund aims to invest in 15,000 more high-quality seats, achieving critical mass and thereby creating a “tipping point” in educational change in city schools.

“Now, more than ever, we need diverse and engaged stakeholders from the private sector to step up and make a difference in our public school system,” said Mayor Jim Kenney. “Too often public rhetoric pits charters and public schools against each other, when really all we care about is better opportunities for our kids. We are grateful to partners like PSP for their continued and unwavering commitment to the children and families of Philadelphia.  And I am excited to see the fruits of their investments born out over the next several years.”

While PSP conducts rigorous due diligence to identify the most promising schools for investment and growth, the organization’s ultimate objective is to accelerate progress in schools citywide. Investments in initiatives that train school leaders and provide richer, easier-to-access school information create benefits that help hundreds of schools and tens of thousands of families. One challenge noted by many of PSP’s previous grantees is the ability to find and retain effective educators, particularly in schools serving the city neediest students. For this reason, a major priority in Fund II will be expanding and diversifying the city’s teacher recruiting pipelines and investing in programs that promote collaborative school leadership.

Recently, PSP’s board of directors approved five new grants to a diverse mix of schools. These new grants total just over $2.5 million.

The first round of Great Schools Fund II Grantees includes: 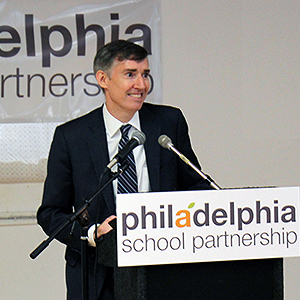 “This announcement represents another positive step as we continue working to improve the educational opportunities for children in Philadelphia,” said Philadelphia School Superintendent William Hite. “PSP has made a positive difference in many of our District schools. Their investments in project-based learning at the newly-opened Vaux Big Picture High School and at Science Leadership Academy at Beeber, among others has been an important part of our progress.  In addition, one of our four Anchor Goals is ensuring 100 percent of our schools have great principals and teachers.  PSP’s commitment to career education and teacher leadership training and development is also helping get us closer to that goal.”

Since 2011, PSP has invested more than $58 million to improve outcomes for children in district schools, charters, private and parochial public and private schools in Philadelphia.  These portfolio schools represent a student population that is overwhelmingly minority (91 percent students of color), economically disadvantaged (84 percent), and on-par with citywide averages for special education (16 percent).

These schools are mostly outperforming peer schools and showing progress across a range of qualitative indicators.  In the portfolio, high school graduation and college matriculation rates stand above city averages and in some cases are approaching statewide averages for Pennsylvania. Enrollment data verify that PSP investments have addressed community needs, with all but two portfolio schools meeting or exceeding enrollment projections. Turnaround schools funded by PSP have seen average increases in enrollment of 22 percent.

The Philadelphia School Partnership is a nonprofit organization that funds the creation and expansion of high-quality Pre-K-12 schools in the City of Philadelphia to give more children access to a great education. PSP also facilitates the sharing of best practices among school leaders that improve the quality of education for students and empowers families with information about school options.

PSP is raising $140 million in philanthropic funds to provide grants for the transformation, growth and startup of high-performing public and private schools in Philadelphia. It measures success by the number of students in Philadelphia who move out of failing schools to better-quality school options based on student academic outcomes.