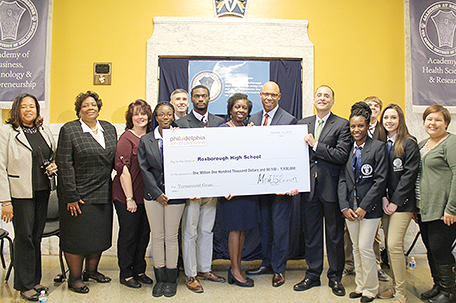 The Philadelphia School Partnership (“PSP”) announced on Monday, it has given a $1.1 million grant to Roxborough High School (Roxborough) to support an academic turnaround. Roxborough, a neighborhood high school, has been implementing an “academy” career and technical education model through a partnership with Philadelphia Academies, Inc. (“PAI”). The grant will help the school improve academic outcomes by creating more alignment and synergy between general education classes and career and technical education classes. PSP has now given nearly $16 million to the School District of Philadelphia, making it the District’s largest private funder.

Roxborough has demonstrated progress in recent years, but there is still significant room for improvement. With the help of a $150,000 incubation grant made by PSP in 2015, the school-based team, led by Principal Dana Jenkins, spent a year crafting a comprehensive turnaround plan and undergoing professional development so that all Roxborough students will graduate prepared for success in life.

“Improving postsecondary outcomes at neighborhood high schools is one of Philadelphia’s toughest challenges,” said Mark Gleason, Executive Director of the Philadelphia School Partnership. “This grant aims to support Principal Jenkins and her team to build on the progress and partnerships already happening and show what’s possible. We’re proud to help provide access to this exciting educational opportunity to families in the neighborhood.”

Roxborough’s plan is focused on transforming teaching and learning so that it is rigorous, student-centered and community-focused; giving students access to additional rigorous programs of study; and building a leadership community that emphasizes holding all stakeholders accountable for the school’s success. Ultimately, the key objectives are producing a higher graduation rate and a higher percentage of college- and career-ready graduates, as evidenced by college persistence and career entry data.

“Thanks to our work towards implementing the career academies model, our students are becoming enterprising and can envision a life beyond these four walls,” said Dana Jenkins, Principal.  “This is education being transformed. The whole Roxborough team thanks PSP for their continued commitment to our students.”

While developing a strategic plan in 2015, the Roxborough team secured buy-in from all parties involved, including teachers, students, parents, and community supporters. PSP’s grant will help fund the consultant services of Dr. Michelle Wilcox, an expert in building school leadership capacity in schools using career and technical education. Additionally, the grant will be used for technology, new curriculum, facilities improvements and a permanent in-house substitute teacher.

“Roxborough’s team and staff have worked hard to create a transformation plan that is focused on ensuring that their students are prepared for college or a career,” said Dr. William Hite, Superintendent of the School District of Philadelphia. “This is an exciting opportunity as we work to improve academic outcomes at our neighborhood high schools. We thank PSP for their longstanding support of public education in Philadelphia.”

Since 2011, PSP has invested over $56 million in Philadelphia schools to create better educational opportunities and help more than 24,000 students gain access to a high-quality education. PSP is particularly committed to reinvigorating neighborhood schools through turnaround investments, with nearly $20 million used for that purpose. In total PSP’s grants include approximately $34 million to public charter schools, $16 million to district schools and $6 million to private schools.

To learn more about Roxborough High School, parents and supporters should visit http://webgui.phila.k12.pa.us/schools/r/roxborough.