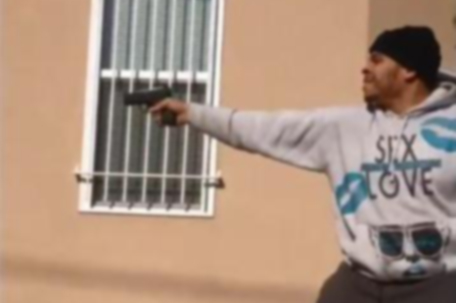 If you were a victim in any of these incidents, please contact The Philadelphia Police Department’s Central Detective Division, Det. Guercio at 215-686-3093/3094.

Daron Stinson, a 21-year-old male from 29XX French Street turned himself into Central Detective Division on Tuesday, February 18, 2014, at 1:05 AM. Stinson is charged with Aggravated Assault, Robbery, and related offenses in regards to the below incidents.

Courtland Gilliam, 19-year-old male from 16XX North 26th Street was arrested on Wednesday, February 19, 2014, for his involvement in the incident below. Gilliam was charged with: Criminal Conspiracy, Simple Assault, Robbery, Theft, and related offenses.

On February 13, 2014, at approximately 2:25 PM, Stinson pointed a black handgun at another male on the 2200 block of Diamond Street and made an undetermined statement to that male, and then fled from the location in a black pick-up truck.

Both of these incidents were recorded and placed on Instagram. The gun used in these incidents was black pellet gun. There were no injuries reported in regards to the above incidents. An Amarex X-B-G, 4.5mm Pellet gun was recovered by police at time of arrest.