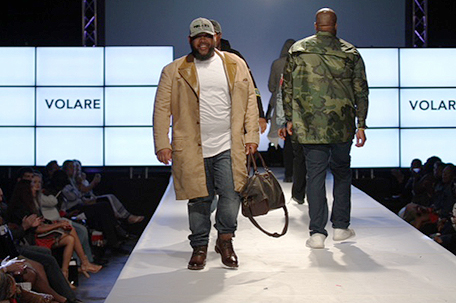 ABOVE PHOTO: Courtesy of Abrii Photography

The scene backstage at Philadelphia Fashion Week was typically energetic. Among the sea of models and designers preparing for the runway was Troy Adkins. Adkins, a shy, soft-spoken Philadelphia native, sat pensively while waiting to debut his line Volare for the first time in his hometown. Volare of Italian origin, translates to “fly” in English.

Fly attire is something Adkins felt was missing from the world of fashion for larger men. Volare was spawned from Adkins’ attempt to fill that niche. “I started my line for bigger guys to try to give them different wardrobe options.” Adkins mentioned some of the common misconceptions associated with big men and fashion. “Big guys are known for being sloppy, people think they don’t have any swag. I just tried to give them things that they can wear.”

Volare gained tremendous momentum since its’ inception in 2015. After being dubbed “the new wave” by Vibe Magazine, and  featured in New York Fashion Week, Adkins is thrilled to bring his success back to where it all started. “It’s exciting, I’m really proud! I’m blessed to have the opportunity to do this. I think I’m going to make history.”

Adkins is well on his way to making history with Volare being the first big and tall menswear line included in Philadelphia Fashion Week. Volare which Adkins described  as “classy and urban with a variety of everything”, offers a wide array of sweatsuits, trench coats, jean jackets, biker jeans, and bomber jackets. Adkins’s lineup showcased 10 pieces worn by celebrities Brandon “Scoop” Robinson, host of CBS’ Brown & Scoop, New Jersey native  Jermaine Jones formerly of American Idol, and many more.

The combination of style, creativity, and celebrity endorsements from Jamal “Gravy” Woodard of Notorious and All Eyez On Me, will serve Adkins well as Volare continues to grow.  Stay updated on Adkins and Volare by visiting www.volarebrand.com and follow him on Instagram @volarebrand.