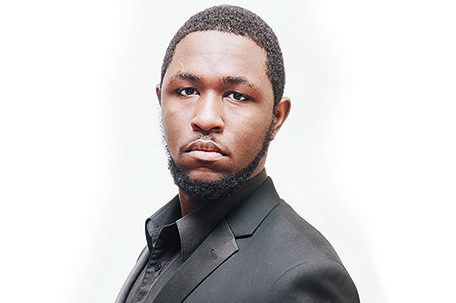 The Tony Award and Pulitzer Prize winning musical “Rent” is one of the longest running and most successful Broadway productions of all time. The standout rock musical was written by Billy Aronson and composed by the late Jonathan Larson. Loosely based on Giacomo Puccini’s opera “La Bohéme,” “Rent” tells the story of a group of struggling artists and self-proclaimed misfits. The group of friends take audiences on a colorful musical journey about life and complicated relationships, while battling poverty by way of ridiculously high living expenses in New York City’s East Village. Set in the 1990s, “Rent” also shines a light on those living with HIV and AIDS.

Philadelphia native and newcomer Shafiq Hicks takes on his first major role as Tom Collins in the 20th anniversary national tour of the play. Hicks spoke to The SUN about his breakout role and how life experience helped him to embody the character.

Hicks started his career as a vocalist, singing in a choir and performing at local conventions. He began honing his craft while attending the High School for Creative and Performing Arts (CAPA).

After graduating from CAPA and going on to college, he continued pursuing his love of musical theater by participating in community theater and semi-professional shows.

He landed a role in “The Wiz” last year with Theater in The X. After taking a semester off from school to see what he could do as an artist, Hicks landed his dream role as the lovable Tom Collins in his first national tour.

“It’s been a huge leap! This is my first fully professional endeavor, so of course I was scared at first and had so many things running through my head,” he said. “Ultimately for this to be my first experience in theater with a tour… I’ve had such a privileged experience and I’m extremely grateful.”

After suffering loss in his own life, Hicks was able to draw from his life experiences to delve into the complex character, a college philosophy professor.

“It’s been a dream role of mine for years now. I learned about “Rent” in high school. Prior to that I only knew the song “Seasons of Love” like everyone else”, Hicks said with a laugh. “My high school did “Rent” the year after I graduated. Shortly after that, my grandmother passed away.”

“I do feel like everything happens for a reason and I feel like I needed to get through that to get to this point in my life,” he continued. “The loss I experience[d] helped me in the long run with certain choices I make for Tom, with him dealing with loss in the show. For me to have gone through that experience, it makes the pain that much more real. “Rent” is such a real story I wanted to give Tom the authenticity that he deserves as a human being and character.”

Tom Collins acts as the glue in the play. He’s the fabric that holds his crazy group of friends turned family together. He is funny, charming and handles devastating loss with both strength and grace. Hicks spoke about capturing the layers of this complicated character.

“This is my first serious role, so it’s been eye opening for me,” he said. “The character is so multifaceted that at first, I didn’t know what to do. I took what I’ve learned with my comical theater past and added in the loss that I actually suffered to give Collins some depth. I’m playing with the balance of trying to be the guy that everyone loves and is excited to see even through the loss. Playing with the different levels of emotions he expresses has been really fun for me.”

Hicks stands on the shoulders of phenomenal performers like Jesse L. Martin and Michael McElroy, who played the role before him. Hicks shared the joy he felt in meeting, connecting and learning from them.

“I’ve literally studied Jesse like a hawk,” he said. “When he was in Vancouver, he actually invited us to his house. It was epic! I got to meet him, we hugged, we embraced and we sang together.  Just to be in the presence of someone so iconic who’s had such a great career… I was really grateful for that.”

“I also studied Michael McElroy who played the role in the final Broadway run,” Hicks continued. “I got to meet him as well. Seeing them and being able to also study with them has been wonderful. Also, we get to work with some of the original crew from the Broadway production and the movie, like the choreographer, the music director and the associate director is actually the director of the tour now. It’s been really great to get their insight on how I can tackle this character.”

In addition to the myriad of emotions that Tom Collins and the rest of the cast experience throughout the show, “Rent” also successfully addresses the impact that HIV and AIDS has had and continues to have on a variety of communities.

“It’s been very moving to hear the stories of people who have lost friends, loved ones and spouses to this terrible disease that wasn’t as treatable as it is today,” Hicks said. “Hearing those stories impacted my performance even more and made it that much more real for me as the person portraying a character directly affected by it in this role. I connected on a bigger level than just I’m playing a part.”

Finally, Hicks shared his excitement about coming back to perform in this iconic show in his hometown.

“I was so excited when I saw Philly on the list! “ he said. “It’s really great to be able to give Philly just a small portion of what they gave me. I got my start there and did everything there up until now. Philly prepared me to be the person I am today.”

Be sure to follow Shafiq Hicks on Instagram at: @thereal_shafiq. “Rent” will be at the Merriam Theater from Friday, October 18 through Sunday, October 20, 2019. Visit: www.kimmelcenter.org for more details on tickets and showtimes.