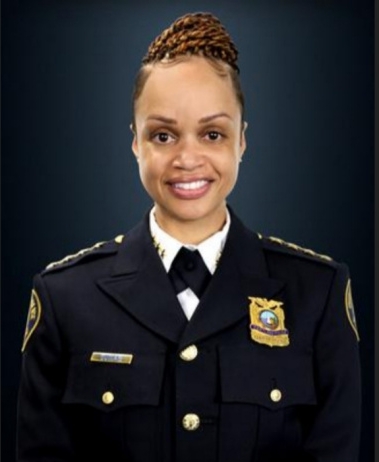 Philadelphia appointed a new police chief to lead the troubled department that has been plagued by sexual harassment lawsuits and racial discrimination — issues she will be suited to tackle with “conviction,” Mayor Jim Kenney said Monday.

Democratic Mayor Jim Kenney announced his choice of Portland Chief Danielle Outlaw to fill the job, which has been open since August when the last commissioner abruptly resigned amid a scandal.

Outlaw spent nearly two decades with the police department in Oakland, California, before being named Portland’s chief more than two years ago, becoming the first black woman to hold that job.

“I am appointing Danielle Outlaw because I am convinced she has the conviction, courage and compassion needed to bring long-overdue reform to the department,” Kenney said in a statement. “After meeting and speaking with her at length, I came away confident that Danielle Outlaw possesses the strength, integrity and empathy vital to the tasks ahead.”

Kenney said Outlaw will focus on addressing racism and gender discrimination and “horrid instances of sexual assault on fellow officers.”

“These are issues that too often negatively impact women — especially women of color — within the department,” Kenney said.

Richard Ross Jr. resigned as Philadelphia’s police commissioner last summer, after allegations were made that members of his department engaged in sexual harassment and racial and gender discrimination against two women serving in the ranks.

One of the women said she once had an affair with Ross. In August, a Kenney spokeswoman said Ross knew about the alleged harassment and failed to respond adequately.

Christine Coulter served as interim commissioner during a search for Ross’ replacement, becoming the first woman to hold the title. Kenney thanked her Monday for stepping in “during a difficult time and lead the force with grace, professionalism and expertise.”

Outlaw called her new job, which she’ll start on Feb. 10, a privilege and discussed her hopes of reforming the department and the public’s perception of it.

“Modern policing is data-driven, but the paramount factor is not so easily quantified: trust — the trust residents have that their police force will keep them safe and treat them with respect,” Outlaw said in a statement released by the mayor’s office. “I am convinced that trust can be restored, here and across the nation.”

In Portland, Democratic Mayor Ted Wheeler brought in Outlaw to bring stability to a department that had experienced a revolving door of leadership, making her the fifth person to in the chief’s job in less than three years.

After being Oakland’s deputy chief, Outlaw took over a Portland department that has struggled to recruit and retain police officers. She relaxed hiring and grooming standards for the bureau amid a critical staff shortage.

The Portland department has been criticized for its handling of protests and clashes between right-wing groups who come to the liberal city and the counter-protesters who show up to confront them.