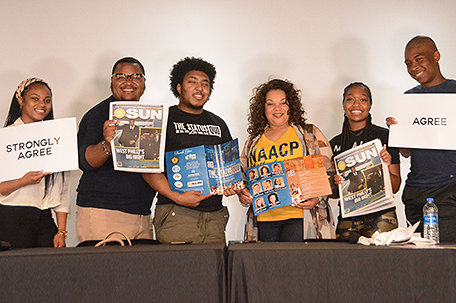 The panel discussed the existing state of affairs, especially regarding social or political issues.

Nina Ball, AAMP’s director of programming and education, spoke openly about an array of interesting facts to the audience.

Philadelphia Sheriff Rochelle Bilal, who also serves as the Philadelphia NAACP Branch Youth Council advisor, also spoke briefly offering some wise and informative knowledge for the room to adhere to and noted how important it was to be a part of the council.

Conversations followed on topics such as mental health and wellness, parental guidance, regulations and policies.

Philadelphia NAACP Branch Youth Council president Jamir Coker did a tremendous job moderating as well as interacting with the folks in the audience, especially during the Q&A session.

One of the questions that stood out was about bridging the status quo gap with the Gen Z-ers.  Each panelist shared their ideas, beginning with Zymir Brunson, Temple University; Jordan Koffi, Temple University; CiNya Vincent and Shania Carpenter, both of William Penn Charter. Each of the students approached the question differently. Interesting conversations, research, facts, knowledge, humor, and respect were conveyed throughout the event.

Of course, this writer is a Baby Boomer (born in 1955) all the way, and my opinion about this  generation is that Boomers have a whole lot to say, whether you want to hear it or not. However, I am sure that whatever category you fall under, good conversations between the mentioned generations can be had and should be, especially considering the climate we are living in today, right now and at this moment.

Philadelphia NAACP president Catherine Hicks said that she hopes to collaborate on more partnerships at this level, as well as hold another NAACP Image Awards Watch Party like the one held in March at the African American Museum of Philadelphia (AAMP).

Hicks gave special thanks and acknowledged AAMP president and CEO Ashley Jordan for her hard work and dedication to the museum and their collaboration with the NAACP.

Also noteworthy, both powerful women demonstrate daily what “empowerment looks like” when you are working together to expose young folks and communities culturally and educationally.