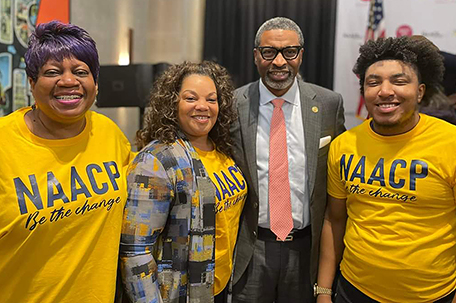 Excitement was already in the air and participants were eager for the press conference announcing the annual 113th NAACP Convention to begin at  the historic John Whelan Boardwalk Hall in Atlantic City last week.

New Jersey Governor Phil Murphy began the press conference with an acknowledgment of his mentor, the late Julian Bond, and about Bond’s place in Atlantic City history.

Murphy also acknowledged the folks in the audience and their efforts in selecting Atlantic City as the location for the 113th NAACP National Convention, which will be held from July 14 through July 20 at the Atlantic City Convention Center.

Atlantic City Mayor Marty Small Sr. — who brought his son and daughter at the press conference in observance of “Bring Your Son/Daughter To Work Day” —  was in attendence, as was Jim Smith of the development & planning committee.

Smith welcomed all and thanked Sandra Harvey for her great support in finalizing the steps for the convention. He also spoke on the casinos’ collaboration in blocking rooms for the NAACP delegates during their busiest season in July.

Leon Russell, chairman of the NAACP board of directors,  announced the theme of this year’s 113th NAACP Convention Conference, which is “This Is Power!” Russell offered a summary of critical subjects to be addressed during the convention.

Michael Turner and Hazel Dukes, also members of the board of directors, spoke about what was expected at this year’s convention and listed the NAACP’s accomplishments. However, Dukes did not hesitate to remind everyone present about where the NAACP was in the past,  where the organization is now, and where it needs to be, which was thought-provoking.

During his remarks, Turner explained that the NAACP is a family, the NAACP ACT-SO is family, all branch units are family, and the community is a family and encouraged all to attend the convention.

Kaleem Shabazz, Atlantic City Branch president and Atlantic City District council member, spoke about the assistance and support of Mayor Small and offered a list of acknowledgments of gratitude and appreciation. He also went the extra mile to recognize all the branch units and ACT-SO units in the room.

National NAACP President Derrick Johnson drove home the purpose of this year’s theme with stimulating, but realistic thoughts.  “We must continue to use our platform, but do not be distracted by other things that are not relevant to the purpose of equity,” Johnson said during his remarks.  “This is power — no distractions. Stay focused!”

Ralph Hunter Sr., Atlantic City’s historian and founder of the city’s African American Museum, spoke about being eager to share all the new exhibits that will be displayed during the convention.

The National 44th NAACP ACT-SO Competition will also be held during the convention from July 14 to July 17.