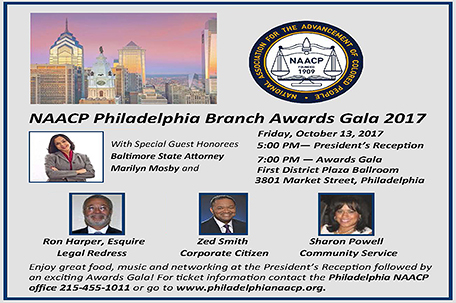 You know the saying “freedom ain’t free?” It is as true today as it was when it was first coined.

Wouldn’t it be wonderful if money just flowed into the coffers of the Philadelphia Branch NAACP’s bank account? However, the truth of the matter is that for every event the Philadelphia branch hosts — including their annual gala event — the NAACP has to raise money and secure sponsors.

The signature Philadelphia Branch NAACP annual event, is the Gala Awards Celebration and Dinner, a program where deserving people from the corporate world and from the community are celebrated for their work and commitment to the causes of civil and human rights,” said Minister Rodney Muhammad, president of the Philadelphia Branch. “The gala awards program is our number one fundraiser we do each year. The funds generated from this event help us [the NAACP] to put our money where our mouth is when needs be, and to stand up and speak out on issues of injustice when and where we can. This year, our gala awards event will take place on Friday, October 13, 2017, at the First District A.M.E. Plaza at 3801 Market Street. Our goal is to fill the ballroom with freedom lovers and people who wholeheartedly support the work and mission of the NAACP.”

In 2013, she announced plans to run for State’s Attorney for the city of Baltimore. She ran against incumbent Gregg L. Bernstein in the Democratic primary. Mosby defeated Bernstein with 55 percent of the vote and faced no opposition in the general election.

Mosby won the general election, receiving 94 percent of the vote, and was sworn into office on January 8, 2015.

Mosby is best known for charging the six police officers in 2015 who had arrested Freddie Gray prior to his death with a variety of crimes, including second-degree murder and involuntary manslaughter, which became a major national story.

The first trial of police officer William Porter resulted in a hung jury. The second trial for another one of the officers ended on May 11, 2016, when Officer Edward Nero was acquitted on all charges. The third trial ended on June 23, 2016, when Officer Goodson was acquitted on all counts. Five of the six police officers unlawfully charged by Mosby are suing her for malicious prosecution, defamation, and invasion of privacy.

In spite of all of the challenges, Marilyn Mosby stands strong and unwavering. There are some segments of society who are not pleased to see a Black woman in the position of State’s Attorney for Baltimore.

“We as African-American women who have gone to school and studied and earned our degrees and earned our jobs and titles, we cannot be moved by jealousies, haters, and detractors,” said Rochelle Bilal, the second Black woman to head Philadelphia’s Guardian Civic League. “We understand our work. We know what must be done. We are very pleased to welcome this distinguished, young lawmaker to Philadelphia, and we anticipate a powerful message from her.”

The award winners for the 2017 gala include Ron Harper, Esq. who serves on the board of directors of the Philadelphia Branch of the NAACP as chair of the Legal Redress Committee. Harper served as an in-house legal counsel for Opportunities Industrialization Center, of America (OIC) for a number of years before starting his own law practice, Ronald J. Harper and Associates in 1972. A longtime member of Zion Baptist Church, Harper chairs the Trustee Board and is president of the Citywide Trustees Organization, as well as holding memberships in various other prominent organizations. He will be receiving the Legal Redress Award.

Sharon Powell will be receiving the NAACP’s Community Service Award. In all her years as a senior member of the Comcast management team in Philadelphia serving as Government and Community Relations Director, Powell made sure that Comcast put significant funding behind many community non-profit organizations and programs. Powell is also well-known for volunteering and working in the community whenever she could.

Zed Smith will be receiving the Corporate Citizen Award. Smith is Chief Operating Officer, (COO) of the Cordish Company. He oversees all aspects of the Company’s operating properties portfolio, which include a number of high-profile entertainment, mixed-use and sports-anchored developments located in urban communities across the country, many of which have been transformative with regard to their economic and cultural impact. Prior to joining The Cordish Companies in 2002, Smith was the founder and President of Urban Asset Management, a Baltimore-based real estate development firm that specialized in retail development in urban communities which included project work in Baltimore, Philadelphia and Washington, D.C.

“We expect this year’s gala event to be bigger and better than ever and for those who say they support the Philadelphia Branch of the NAACP, supporting our gala by purchasing tickets will be [a] true demonstration of oiling the wheels that make the Philadelphia NAACP positioned to help when called,” said Muhammad said.

(Wikipedia contributed to this article).