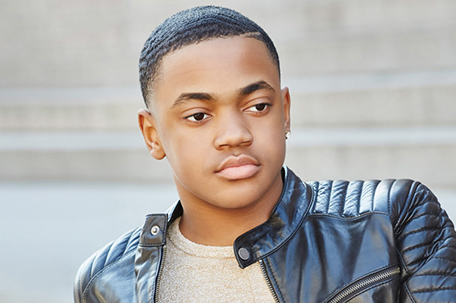 Last year because of the coronavirus pandemic, the leaders of the National NAACP opted to host a virtual national convention this summer, for the health safety of all involved.

The 112th national convention took place from July 7th to July 14th. The ACT-SO competition was spread out over a few days with the awards ceremony taking place Sunday, July 11th.

“One of the things that makes the NAACP special to me is that they don’t forget to keep our youth engaged,” said Philadelphia NAACP ACT-SO committee chairman Sean Parker, who just ushered a group of local youth through the National NAACP ACT-SO competition. “One of the ways we draw the youth in is through our NAACP ACT-SO program”

To hype up all the youth from across the nation, of which there were some 510 participants, convention planners booked a popular actor to kick off the awards ceremony,  Michael Rainey, Jr., who plays the role of Tariq St. Patrick in the TV series, “Power Book II: Ghost,” on Starz cable network.

“To all the seniors, before you leave for college, tell ten younger students about the NAACP ACT-SO program!” he said to the audience.

“When Michael said that, even though this was all virtual, you could see the smiles on the faces of our youth, and you could see them clapping and cheering in agreement with him,”  Veronica Norris, vice chair of the Philadelphia Act-So program said.

“It was nice to see that even a star understands the importance of the NAACP and involving our youth.”

ACT-SO stands for Afro Academic Cultural Technological Scientific Olympics — “Olympics of the Mind,” ACT-SO is a major initiative of the NAACP, founded in 1978 by renowned author and journalist Vernon Jarrett, The initiative provides a forum through which youth of African descent can demonstrate academic, artistic, and scientific prowess and expertise, thereby gaining the same recognition often only reserved for entertainers and athletes.

High school students who are amateurs in the categories of competition are eligible to participate.

Each year, local ACT-SO units across the nation host local competitions in their respective states.

There are many benefits of participating in ACT-SO. ACT-SO is a valuable learning experience for its students, first and foremost. A major focus of the ACT-SO program is to provide enrichment and mentorship to the youth it serves.

ACT-SO students work with mentors, coaches and professionals who help them develop projects throughout the year in preparation for the local and national competitions. Students who compete at the national competition have opportunities for scholarships and other rewards provided by national sponsors.

“I wish we had had some medals this year for our Philadelphia students, however, we did get some winners from the Harrisburg area,” Parker said.

“If any of us win, we all win, that’s the way we looked at it. We actually had four youngsters compete in a total of five categories from Philadelphia. Our youth competed in photography, music instrumental classical, music instrumental contemporary, poetry written and poetry performance. “

“Our one young man who competed in the instrumental contemporary category has been accepted at six ivy league universities and he’ll start at Harvard University in the fall,” Norris added. “Peirce Ellis is outstanding.

Another one of our students, Kyla McKnight, who’s been competing with ACT-SO for the last three years, has been accepted at a university in Spain, where she‘s enrolled for the fall semester on a full scholarship. She’s amazing as well.”

Both Parker and Norris agree that all the youth are winners in their book, and they look forward to recruiting more students for the Philadelphia NAACP ACT-SO program.