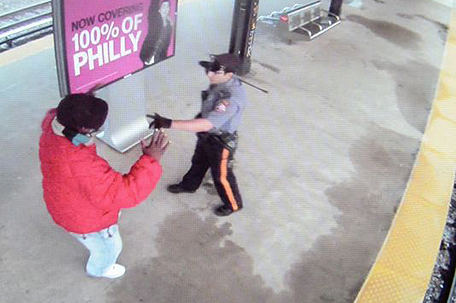 The suit alleges that Fiocca used excessive force while arresting Mr. Patterson on May 3, 2016, and then filed false criminal charges against Patterson that were ultimately dismissed on October 5, 2016 by a Cherry Hill Municipal Court Judge.

The assault was captured by PATCO surveillance video.  Fiocca was fired by DRPA months after the incident.

Patterson’s attorney, Kevin Mincey, said “Today is another step in obtaining justice on behalf of Mr. Patterson.  Mr. Patterson suffered a brutal attack at the hands of PATCO officer Fiocca despite the fact that Mr. Patterson was not breaking any laws and was simply waiting for his train on the platform.

It is amazing that Mr. Patterson survived this incident since he fell on to an active train track and landed so close to the electrified rail.  Filing suit today is a step in making sure that those responsible for Mr. Patterson’s injuries are held responsible.” Attorney Thomas Fitzpatrick added, “Unfortunately this type of officer misconduct reaches all of our communities with increasing regularity.

Watching the video of officer Fiocca spraying Mr. Patterson in the face with pepper spray while he is sitting down and then continually striking him in his legs with the baton is both frightening and infuriating.

We will fight for justice for Mr. Patterson and others like him who have their rights violated by those that swear to protect them,” Attorney Thomas Fitzpatrick added