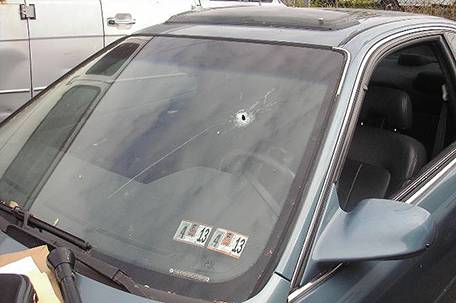 The Philadelphia man convicted of straw purchasing numerous guns for a teenager, who then used one of those guns to shoot another young man, was sentenced last Monday to a maximum of 14 years in prison.  Judge Earl Trent Jr. sentenced Luke Dercole, 33, to 2 to 14 years in prison at the Criminal Justice Center.

In February of this year, Dercole was charged by the Attorney General and District Attorney’s Office Gun Violence Task Force (GVTF) with Illegal Transfer, Firearm Not to be Carried with a License, Carrying Firearms on Public Streets, Possession of a Firearm by a Minor, Corruption of a Minor, Conspiracy, Unsworn Falsifications to Authorities and Tampering with Public Records for buying four guns for a 16-year-old drug dealer.

“The fact that a grown man bought four different guns for a 16-year-old is unfathomable,” District Attorney Seth William said at the time of Dercole’s arrest.  “That coupled with the harsh reality that the teen then used one of those guns to shoot another young man only cements the need for tougher penalties for straw purchasers in Pennsylvania.”

“Buying multiple guns for a minor, who then shoots another teen, is not only unacceptable – it is a tragedy,” added Pennsylvania Attorney General Kathleen G. Kane in February. “This is an example of how enforcing sensible laws against illegal gun trafficking makes our streets safer.”

Burak, then, used one of those guns to shoot 20-year-old Jonathan Espinoza on October 28, 2012 at 1250 Van Kirk Street, Philadelphia.  Burak pleaded guilty and is currently serving 4 to 8 years in state prison.

Police were led to Dercole and Burak after a narcotics investigation in January of 2013.  Agents were investigating a home on Frankford Ave when they discovered a 9mm, Glock, semi-automatic pistol.  Police were able to determine that the firearm was one of four purchased by Luke Dercole in October of 2012.  It was also determined that none of the four firearms were reported stolen or missing.  Once interviewed by police Dercole admitted to buying the guns for 16-year-old Michael Burak in exchange for packages of heroin.  Dercole told police he exchanged the different guns because Burak was not happy with the type of guns that Dercole obtained.

• On October 23, 2012 Dercole then exchanged the .380 caliber Taurus for a 9mm Glock, semi-automatic pistol, the 9mm Glock was then used by Michael Burak to shoot 20-year-old Espinoza in October.