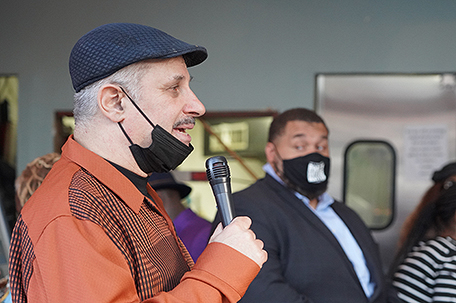 Ever been stuck on a problem you couldn’t solve, and trying to find the answer on Google simply added to your frustration? Chances are, having a brain trust could have helped you solve the problem in a few hours, if not minutes.

At its most recent networking event, Philadelphia Legacies had numerous business and community leaders in attendance that could have offered a feasible resolution. The events’ participants, totaling over 75, are members of the organization’s brain trust. They also participate in a larger network of well-informed professionals who help each other out when needed.

The networking meetings are held quarterly at the Aksum Café, which is located at 4630 Baltimore Avenue in West Philadelphia. According to Steve Satell, founder and executive director of the Legacies Awards, the gatherings  fall under the umbrella of the organization, offering an opportunity to develop a “solution-driven brain trust” that encourages its supporters to share resources or to pursue mutually beneficial partnerships.

Philadelphia Legacies was established in 2016 by a City Council resolution. Each year, the organization honors Philadelphians who have made major contributions to the city. To honor them, portraits of each honoree are commissioned by an exceptional local artist and presented and unveiled at an annual event. Recipients have included sports legends, as well as business and community leaders.

Additionally, a number of community service recipients are recognized for contributions that have influenced the growth of Philadelphia’s communities. A portion of the event’s proceeds are donated to non-profit organizations that have demonstrated long-term success.

Satell is building a brain trust among the program supporters. They are not simply a group of your high-level peers. They are people whose fresh perspective on problems will help networkers gain insights that would have likely taken many years to figure out on their own. The resource pool of individuals that Satell envisions has evolved from a traditional brain trust. Historically, a brain trust was a group of advisers who aided a state leader in making important decisions. The first brain trust was formed around US President Franklin Roosevelt in the 1930s.

Remember that this isn’t your traditional networking occasion. Satell asked those in attendance to introduce themselves and to share the services and skills they could potentially offer to assist networkers.

“You’re looking for people who don’t necessarily share a common career or organizational mandate, but instead a common vision for their organizations and interests,” he said.

Representing Satell’s vision were networkers like Mercer Redcross and Rashida Jabbar, who have both supported the event since its inception six years ago.

Jabbar is co-founder of the Humanitarians of Light Association, Inc (HOLA), a registered 501(c)(3) organization that focuses on community outreach and humanitarian efforts.

Her work, which spans 30 years, has earned Jabbar a reputation as a credible and an informative source in grassroots organizations that address health issues related to women, AIDS & HIV and community anti-violence. In 2020, Jabbar was also the recipient of the prestigious Philadelphia Legacies 4th Portrait and Community Awards for her lifelong work.

“It may seem counterintuitive, but you shouldn’t aim to just exploit other people’s knowledge and experience,” noted Jay Bagley, who heads up Skylark Motion Inc., a Philadelphia non-profit that refurbishes computers for community distribution. “I found that the Legacies’ networking events helped me meet others through introductions that enabled me to create new opportunities to collaborate with someone.”

It was at a Legacies networking event that Bagely — who has attended the networking events for 4 years —  met Glenn Paul, a corporate executive from Trenton, NJ. After a brief introduction and conversation, Paul indicated that he had 2,000 computers he would like to donate. In short order, Bagley accepted the offer and with a team of four refurbished the computers and donated 1,500 of them to schools, students, families, small businesses, nonprofits and churches.

For Stephanie Booker, who founded the non-profit AHARI, what began as a simple master’s degree project has grown into a passion for supporting veterans and their families. The networking event, she indicated, represented a place where she could ask for advice and counsel as she endeavors to undertake a major housing initiative.

“Creating this kind of concentrated, highly effective information network won’t happen in a couple of days or weeks,” said Booker, who noted that time and hard work will help build the support she needs.

Satell, the Philadelphia Legacies’ networking creator, believes the benefits of the network, and its brain trust, are many. Here are a few words of advice to participating and prospective networkers:

Create a team to vet ideas from the outset; don’t wait until there is a business model. You need to introduce your idea to a variety of experts and encourage them to scrutinize it so you don’t waste time creating a business plan for a product or service that isn’t viable.

Try to include different ages, genders, backgrounds and areas of expertise. Innovative ideas and solutions surface when the people in the group have different perspectives.

Have all members agree to create a safe place for thinking out of the box and exploring new ideas. Establish a sense of collaboration and shared purpose to foster free and open discussion.

4.  Business is a priority.

A brain trust session is not a social meeting; it’s a serious working session where each member is counting on feedback from people they respect. Establishing accountability is important.

Networking brain trust members must be willing to share ideas, information and resources. At every session, anyone who has an “ask” of the group must also be willing to “gift” a resource. This needs to be a “win-win” for everyone involved.

The major take away from the networking event, according to Satell, is that if you want a good community, you have to participate in its development and rebuilding. Something, he believes, many people seem to forget or never really think about at all.

“As the Brain Trust continues to grow, it will continue to allow us to empower a community of people who have a vested interest in the professional and organizational success of those who support it,” he said.