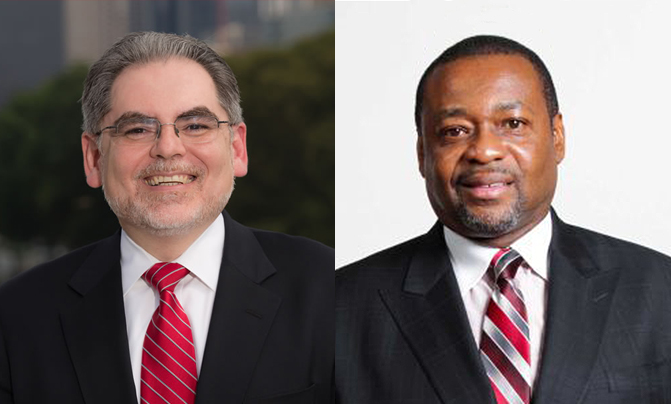 The Philadelphia Martin Luther King, Jr. Association for Nonviolence, Inc. (King Association) is proud to announce that The Philadelphia Foundation, where Pedro Ramos is President and CEO, and Dr. Arthur C. Evans, Commissioner for the Department of Behavioral Health and Intellectual Disability Services (DBHIDS) will be among the 2017 Drum Major Honorees for the association’s 35th- Annual Awards & Benefit Luncheon to be held at the Sheraton Downtown Philadelphia Hotel, 17th and Race Streets, on Monday, January 16, 2017 at noon. This luncheon is one of the oldest major events in Philadelphia that is held annually not only to honor outstanding citizens of today, but also to honor the legacy and memory and work of Rev. Dr. Martin Luther King, Jr.

In addition, the association will honor two of their long- term volunteer service supporters, Lillie Oliver and Howard P. Mallard, Jr. Both recipients will receive an award in honor of C. DeLores Tucker for their many years of helping the Association to “keep the dream alive”.

The Annual Awards and Benefit Luncheon will be preceded by King Association’s 32nd Annual National Bell Ringing Ceremony to be held at the Liberty Bell at 11:15 AM. The symbolic ringing of the Liberty Bell happens at exactly 12 noon. Both events will be attended by U.S. Senator Robert Casey, Congressman Dwight Evans and other officials. This year’s honorary bell ringer is American Urban Radio Network’s White House Correspondent, April Ryan.

Besides being the leader of a $1 billion dollar healthcare agency, Dr. Evans is a visionary in the behavioral healthcare industry and speaks to healthcare leaders and organizations across the nation. He serves approximately 120,000 people every year and taken DBHIDS through a system-wide transformation during his leadership. The association is extremely pleased about his commitment, especially to children.

The Philadelphia Foundation has been committed to improving the quality of life in Philadelphia and its surrounding areas since 1918 by building, managing and distributing philanthropic resources of grants and scholarships to many organizations, including the King Association. They are committed to building and encouraging strong youth leadership.

“It is an honor for the Philadelphia Martin Luther King, Jr. Association for Nonviolence, Inc. to honor these two leaders as well as our dedicated and unselfish volunteer awardees,” said Dr. William Tucker, President/CEO, King Association. All of our honorees truly epitomizes the ideals of Dr. King, each in their own ways.”

Our 2017 Luncheon Chair is Charisse Lillie, Esq., former corporate executive and attorney and our luncheon Mistress of Ceremonies will be Emmy Award- winning CBS 3/TheCWPhilly Weekend News Anchor, Natasha Brown. Special music will be provided by the Pine Forge Academy from Pine Forge, Pennsylvania and the Jubilee Bell Ringers.

The Honorable Dr. C. Delores Tucker and a group of community leaders held the first Philadelphia luncheon is 1982 as a way to raise funds for the establishment of Rev. Dr. Martin Luther King’s birthday as a federal holiday, which was first celebrated in 1986. Dr. Tucker officially formed the King Association in 1983 at the request of  Coretta Scott King. Mrs. King knew that Philadelphia held a special place in her husband’s heart and thought it fitting to have a permanent organization dedicated to his ideals of peace and freedom here in the city.

The Philadelphia King Association is an organization that aims to preserve and advance the work of the Rev. Dr. Martin Luther King Jr. through educating, advocating and promoting nonviolent principles and philosophy. It is the only affiliate commissioned in the nation and the world by Mrs. King and the Atlanta-based Martin Luther King Center for Nonviolent Social Change, Inc.

The association hosts nonviolent workshops throughout the city through schools and other organizations. The luncheon is the major source of funding to assist in continuing the nonviolent and educational programs it provides. Among the major educational programs organized offered is the College for Teens program, a year-round program that helps encourage succeed in high school and beyond and includes the Educational Ambassadors of Nonviolence Club, where students are trained to be leaders in their communities and schools. The organization also organizes two events for underprivileged children and families during the Christmas holiday season.

For tickets and more information on these events, please contact the King Association at 215-751-9300 or can be purchased online at www.philadelphiamlk.org.