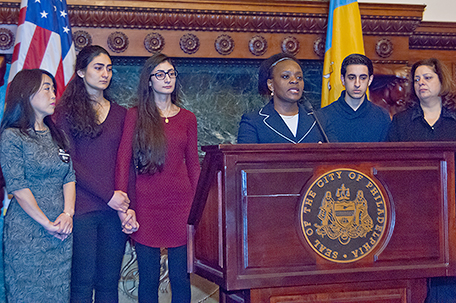 The City of Philadelphia is among two dozen U.S. cities that have filed a friend-of-the-court (amicus) brief in the federal district court in Seattle, where six States have challenged President Donald Trump’s second attempt at restricting travel into the United States from six majority-Muslim nations is being heard.

“It is vitally important for us to join other cities to show that this revised second travel ban is still legally flawed,” said City Solicitor Sozi Pedro Tulante.  “By joining in this brief, we want to inform the Court that we believe that the travel ban is not only illegal, but it also hurts Philadelphia and offends the values that make this City a welcoming place for refugees fleeing persecution and for immigrants seeking to start a new life.”

The executive order restricting immigration prohibits people from six countries—Iran, Libya, Somalia, Sudan, Syria and Yemen—from entering the U.S. for 90 days and halts the admission into the U.S. of people granted refugee status for 120 days while the Trump administration revises immigration screening procedures.

The U.S. District Court in Seattle is considering the States’ emergency motion to apply its existing injunction to the new executive order. The Cities’ amicus brief explains the vital contribution that immigrants make to our cities and country, points out that classifications based on religion and natural origin are presumptively invalid, and argues that the travel ban is misguided and unconstitutional.

“I’m proud that Philadelphia has joined with other cities throughout our nation to oppose the revised travel ban,” said Miriam Enriquez, Philadelphia’s Director of Immigrant Affairs.  “This reinforces Philadelphia’s commitment to protecting our immigrant and refugee communities, and to being a welcoming city to all.”

The City of Philadelphia provided data to counsel that prepared the amicus brief on behalf of the Cities.  Among that data:

In Philadelphia, approximately 197,563 (14 percent) of Philadelphians were born in other countries.

Travel ban lifted but for how long? Court must decide