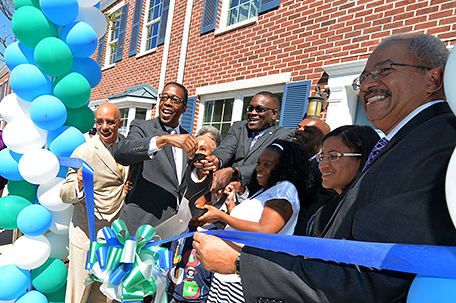 “When the City supports the development of affordable housing, we take a step forward in making Philadelphia a better city for all residents,” said Mayor Michael A. Nutter.  “Through the smart and careful planning of the Philadelphia Housing Authority, the Strawberry Mansion neighborhood has become more attractive to investors and developers who will revitalize this area.  My hope is that there will be many more developments similar to the Gordon Street Apartments in the future.”

The site is bounded by 30th, Arizona, 31st, and Gordon Streets. The modest new development features a mixture of walkup units and townhomes.  Fourteen units are located on the north side of the 3000 block of West Gordon Street while seven other units are positioned on the 2300 block of North 30th Street. The area behind the new homes has off-street parking and green space, filling out the area to Arizona Street.

The construction of the Gordon Apartments created 50 new jobs. Forty-two of the hires are Section 3. These are job opportunities for low and very low-income people in the community

“Whenever the housing authority can improve a neighborhood with quality, affordable housing, it’s a plus,” said PHA President and CEO Kelvin A. Jeremiah.  “This development along with one already opened on Oakdale Street and another planned in the area of 33rd and Berks represent a total investment of over $25 million by PHA in Strawberry Mansion.  We hope that our commitment to this neighborhood will encourage others to invest here. I want to thank Mayor Nutter, City Council President Darrell Clarke and the Strawberry Mansion community for their continued support.”

“The redevelopment of this long-vacant parcel is part of the continued revitalization of historic Strawberry Mansion,” Council President Clarke said. “Increasing the number of quality housing units in this community is consistent with City Council’s comprehensive strategy to increase affordable housing opportunities across the city to ensure balanced neighborhood growth and strategic community investment.  I want to thank Kelvin Jeremiah for encouraging equitable development in Philadelphia, which will surely spur additional growth in the areas that need it most.”