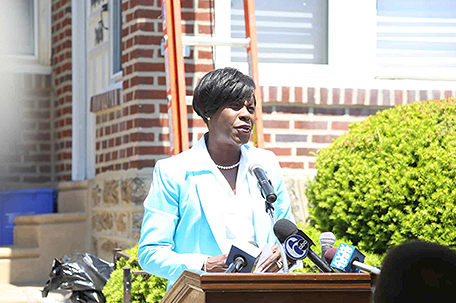 Councilmember and Majority Leader Cherelle L. Parker (9th Dist.), along with Dr. Ira Goldstein, president of policy solutions at Reinvestment Fund, and all the members of the Philadelphia Home Appraisal Bias Task Force, have issued its final report and recommendations.

This report is the culmination of more than a year’s work. On February 25, 2021, Parker co-wrote an op-ed with Ira Goldstein from Reinvestment Fund and Professor Gregory Squires from George Washington University that was published in WHYY’s PlanPhilly and entitled “Home appraisals drive America’s racial wealth gap – 95% of Philly’s appraisers are white.”

Then, on April 26, 2021, Philadelphia City Council’s Committee on Housing, Neighborhood Development, and the Homeless heard Parker’s Resolution #210208, which authorized the committee to hold hearings examining the race gap in home appraisals and its impact on homeownership and wealth accumulation in Philadelphia. During the hearing, the committee heard from national experts as well as local, on-the-ground practitioners.

While there were several useful recommendations offered during the course of the hearing, it became clear to Parker that the issue of racial bias in home appraisals would need a more in-depth focus in order to gather recommendations for the local, state, and federal levels.

During the hearing, Parker committed to creating a working group made up of those who testified at the hearing, as well as additional experts and practitioners in the field. The working group ultimately became the Philadelphia Home Appraisal Bias Task Force. The Task Force met several times throughout 2021 and into 2022.

The report organizes recommendations for local, state, and national intervention by a set of key problems to be solved when it comes to appraisals. Some recommendations may require legislation, while others just require internal policy and process improvements, as well as the political will to make those much-needed changes.

“While I understand that Philadelphia is often reliant on both the state and federal levels of government for policy and funding, it is also not my style to just sit around and wait for help to arrive,” Parker said. “I think we, at the local level, can come up with solutions not just for Philadelphia, but also for Pennsylvania, and the nation. That is what this task force tried to accomplish.”

“What became clear through the task force meetings is that racial bias in home appraisals is a real problem with multiple causes, and both neighborhood and personal consequences,”  Goldstein said. “Unlike what we have in the mortgage lending industry, there is a total lack of transparency into home appraisals. Philadelphia will work to improve data access on appraisals locally, and will support a federal effort to create a national public reporting process.”

To accompany the report’s release, both Parker and Goldstein participated in a webinar on July 28 titled “Appraisal Bias: Actionable Recommendations from the Philadelphia Home Appraisal Bias Task Force.”

The report is needed at this time because home appraisals have a significant impact on homeownership and wealth gaps among different racial groups. By establishing the value of the property for a home loan, an appraisal can determine what price a seller gets, whether a home equity loan can be borrowed for home repairs, college tuition, or other intergenerational wealth-building purposes, and ultimately, what value a property has when passed on to the next generation.

Homeownership is the most common way households in America build wealth. Yet homes in minority neighborhoods are valued below comparable homes in white neighborhoods. And that drives the wealth gap between Black and white households: the Brookings Institution reports that in 2019 the median white household held $188,200 in wealth — 7.8 times that of the typical Black household at $24,100.

The Philadelphia Task Force was not founded to keep meeting in perpetuity. Instead, its goal was to have a limited lifespan (about one year), and to put forward recommendations not just for the City of Philadelphia, but for other cities, and the nation. That said, the work is not done and there is energy expressed around future meetings to ensure that people remain engaged in the issue, and that local experience can inform state and national policymakers. Task force members also expressed interest in using future meetings to encourage the implementation of the recommendations contained in the report.

Read the report at: http://phlcouncil.com/wp-content/uploads/2022/07/PhiladelphiaHomeAppraisalBiasTaskForce_Report_FINAL.pdf.