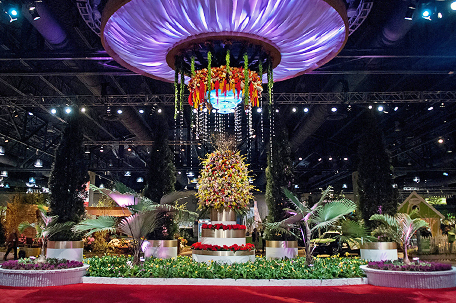 With the force of a blockbuster film, the 2015 PHS Philadelphia Flower Show, “Celebrate the Movies,” thrilled movie fans, garden-lovers, and everyone else who experienced the largest and most beautiful horticultural event in the nation.

About 250,000 visitors enjoyed the show at the Pennsylvania Convention Center from Feb. 28 through March 8, approximately 10 percent more than the previous year. The Flower Show recaptured the excitement and magic for young people this year, more than doubling the number of children and students over last year. More than 15,000 people also joined the Pennsylvania Horticultural Society at the Flower Show.

The show made the news in many ways. PHS co-hosted the candidates at Philadelphia’s first 2015 Mayoral Forum at the Flower Show. Film and TV star Dan Aykroyd greeted show-goers and announced a donation for the family of slain Philadelphia police officer Robert Wilson III, and his generosity was noted in news media across the U.S.

Other celebrities appeared at the Flower Show, including singer Christina Milian, Ethan Wayne (John’s son), and film star Pam Grier, who had one word for the show’s amazing exhibits: “Brilliant.”

Headlines in the Philadelphia Inquirer proclaimed “Beauty in Bloom” and “Starstruck by Blossoms.” A visitor from Newville, Pennsylvania., said, “This was my first [Flower Show] and I was blown out of my socks.”

Eleven-year-old Kate Abbey, of East Lyme, Connecticut., spoke for her peers: “This is really cool.”

Hundreds of beaming, costumed little girls enjoyed photo-ops with Cinderella on the last day of the show, Cinderella Sunday.

Other events introduced this year included College Night and Fido Friday, when human and canine guests gathered for a “Yappy Hour” in the first indoor PHS Pop Up Garden at the Flower Show. The new PHS Horticulture Cider, a hard cider crafted by Wyndridge Farm, was introduced at the Pop Up and soon will be available throughout the region.

Honored recently with the Grand Pinnacle Gold award as the world’s top event by the International Festivals & Events Association, the Flower Show reached new heights in 2015. The floral and garden designers used Disney and Disney•Pixar films as inspiration for their exhibits, which captured the spirit of favorite movies from Cars to Frozen and Maleficent to the new live-action film Cinderella. The show’s Entrance Garden created the dazzling atmosphere of a Hollywood movie premiere, as guests walked a red carpet through an Art Deco movie palace made of flowers and lights in blazing neon colors.

Visitors also raved about the Butterfly Experience, a chance to interact with dozens of rare species, and the Gene London Hollywood Collection, a gorgeous display of iconic costumes worn by film stars.

In the weeks ahead, PHS will offer sneak peeks of the 2016 PHS Philadelphia Flower Show, which will celebrate the beauty of America’s national parks.