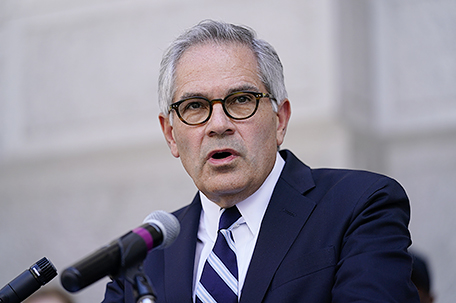 In the first big challenge to the proposed $26 billion national opioid settlement, the Philadelphia district attorney last Thursday sued Pennsylvania’s attorney general over the deal, saying the city stands to get only a pittance to cope with an epidemic that is killing more than 1,000 people a year.

With Philadelphia pursuing its own, potentially more lucrative litigation against the opioid industry, District Attorney Larry Krasner denounced the national agreement and asked a state court to declare that Attorney General Josh Shapiro has no authority to bind the city to it.

Krasner blasted Shapiro, a fellow Democrat, for acquiescing to a settlement that he said fails to hold opioid distributors and manufacturers sufficiently accountable for the damage they have caused in Philadelphia and elsewhere.

“We are not going to accept a settlement that is a sellout,” Krasner said in a news conference. “And from what I see, this is a sellout.

The money is too low, the payments are too slow, and the money may never show.” Shapiro’s spokesperson accused Krasner of “misrepresenting the facts to Pennsylvanians.”

The national settlement “is the only way to jumpstart a billion dollars’ worth of treatment for communities in need any time soon,” said the spokesperson, Molly Stieber. “The alternative is to make families wait years for an uncertain outcome that could leave them with nothing.”

The state’s top prosecutor and expected 2022 gubernatorial candidate has previously acknowledged the opioid epidemic’s cost is “far more than this deal” but said it would provide an infusion of funds for treatment and addiction and put in place significant controls on the industry.

Shapiro’s office said the settlement already gives local governments the ability to sue if they opt out of the national deal.

The settlement is part of the ongoing effort to address the nationwide opioid addiction and overdose crisis.

Prescription drugs and illegal ones like heroin and illicitly produced fentanyl have been linked to more than 500,000 deaths in the U.S. since 2000. The number of cases reached a record high in 2020.

If approved, the settlement will likely be the largest of many in the opioid litigation playing out nationwide. It’s expected to bring more than $23 billion to abatement and mitigation efforts, with the money to come in 18 annual installments.

Krasner said Philadelphia would get only $5 million to $8 million per year out of the agreement, with loopholes that he said could allow the companies to pay less or nothing at all.

He said the city plans to continue pursuing its own lawsuits, predicting enormous legal awards that would dwarf what the city would receive under the national settlement.

“We are expecting a number that looks, frankly, enormous, compared to this number,” Krasner said.

Philadelphia Mayor Jim Kenney declined comment on Krasner’s suit, but agreed that Philadelphia would get too little money out of the settlement and said the city and other hard-hit communities weren’t given a “meaningful voice and opportunity to participate” in the negotiations.

The proposed national settlement would deliver about $1 billion to Pennsylvania — but that assumes full participation by local governments, which have five months to decide.

The companies — the drugmaker Johnson & Johnson and major drug distribution companies AmerisourceBergen, Cardinal Health and McKesson — can back out of the settlement if they don’t think enough state or local governments sign on. The fewer that sign on, the less the companies would pay.

Philadelphia’s lawsuits “cannot and should not be extinguished by the Attorney General’s settlement,” said Krasner’s lawsuit against the attorney general.

“Simply put, the Attorney General cannot and should not allow the Big 3 to name their own price for the Philadelphia lives they took.”