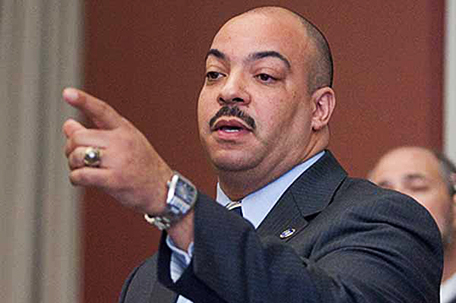 Philadelphia District Attorney R. Seth Williams Wednesday was joined by Philadelphia City Commissioners Clark, Schmidt, and Deeley and David Thornburgh, President and CEO of the Committee of Seventy to share details about how their offices are preparing for the November 8th election.

“The coverage of this upcoming election is unlike anything we have seen before, not to mention the fact that one of the nominees for president has been making false allegations about the integrity of Philadelphia’s elections for weeks now, but we are ready,” said District Attorney Seth Williams. “The Election Fraud Task Force is ready to respond to whatever happens on November 8th and I want to make sure each and every Philadelphian who has a concern or is experiencing difficulty casting their ballot calls us.”

Once the polls open, Philadelphians can call the Election Fraud Task Force at (215) 686-9641, 9643 or 9644 if they are experiencing difficulty casting their ballot. The Task Force will have more than 70 Assistant District Attorneys (ADA) and several dozen detectives, the most assigned to the Task Force to date, available to address any Election Day concerns.

ADAs will be strategically deployed throughout the city before the polls open. Additionally, there will be ADAs specially assigned to support the Committee of Seventy’s Election Day activities and ADAs stationed in Philadelphia’s Central Election Court to respond to any Election Day concerns. As always, if the need arises, the Election Fraud Task Force can enlist any of the 300 ADAs who are not in court on Election Day to respond to emerging issues.

“Voters should have confidence that our offices are working, and will continue to work, together to ensure a fair election,” said Al Schmidt, Philadelphia City Commissioner. “We are here today to tell you that we will be ready, and that you should contact us should any issues arise.”

“The Office of the City Commissioners and their Civil Service staff have been working 12 to 14 hour days to prepare for a smooth, fair and transparent election in the City of Philadelphia. We urge all of our voters to be proactive and visit our website philadelphiavotes.com or call (215) 686-1590 to find out their polling location. As an added resource, we are mailing every voter in the City a postcard with their name, address, Ward, Division and their polling location. We have also partnered with 311 to help voters find their polling locations, either through 311’s website or by calling 311 directly,” said Lisa M. Deeley, Philadelphia City Commissioner.

“While we have sometimes seen things differently, we are pleased today to join in common cause with the City Commissioners and the District Attorney to reassure Philadelphian voters, and the nation, that we expect a fair and honest election next Tuesday. This election is too important. The eyes of the world will be on Philadelphia, the City Commissioners and the District Attorney’s Office, and we commend them for redoubling their efforts to ensure that every vote counts, that every voter counts, and that anyone who chooses to disturb or distort the process will feel the full force of law,” said David Thornburgh, President and CEO of the Committee of Seventy.

Typically, the Task Force is asked to respond to allegations of illegal voting, candidate write-in issues, refusal of election boards to recognize poll watcher certificates, intimidation and illegal electioneering. To date, the Task Force has made eight arrests for voter fraud related issues.

Most recently, four election officials from Philadelphia’s 18th Ward, 1st Division were charged after the 2014 General Election for voting multiple times after the polls closed and for falsely certifying an election official’s residency.

In 2014, Williams created the Election Fraud Task Force to investigate and prosecute allegations of Election Day criminal activity. The Task Force continues to be part of the District Attorney’s Special Investigations Unit and is staffed by ADAs and detectives. The office will also issue Election Day updates via its Twitter account while the polls are open.