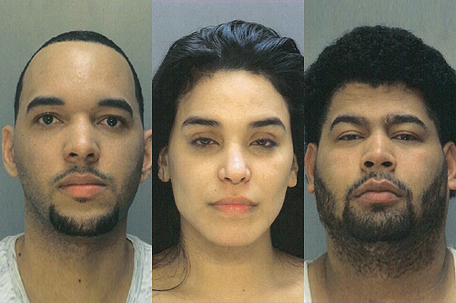 Philadelphia District Attorney R. Seth Williams on Thursday announced the results of a successful joint investigation with the Drug Enforcement Administration (DEA), Philadelphia Division that led to the arrest of three drug dealers and the confiscation of $3.3 million in heroin. Gheral Alavarez-Mercedes (DOB: 11/18/86), Zamary L. Roldan (DOB: 10/11/90) and Johel Pascal-Mateo (DOB: 11/24/90) have all been arrested and charged with Possession with the Intent to Deliver (Ungraded Felony) and Conspiracy (Ungraded Felony). If found guilty, each defendant could face approximately 60 years in prison.

“The more than 13 kilograms of heroin, which has a street value of $3.3 million dollars, that you see before you is thankfully no longer on the streets of Philadelphia,” said District Attorney Seth Williams. “I would like to thank the men and women of the Philadelphia Division of the Drug Enforcement Administration for their partnership and the hard work of my office’s Dangerous Drug Offender Unit. Recently our city learned about the deaths of several individuals from ‘bad’ heroin, and even though we don’t yet know if the heroin that came from this bust was or was not laced with deadly chemicals, it still sends a clear message that Philadelphia’s law enforcement community is going to keep doing all it can to make our streets as safe as they can be.”

“The criminal allegations against these three defendants involve a significant amount of heroin,” said Gary Tuggle, Special Agent in Charge of the Drug Enforcement Administration’s Philadelphia Division. “Philadelphia County, as well as the Commonwealth at large, has experienced the loss of thousands of lives over the past few years due to fatal drug overdoses – the majority of which are the result of heroin. The seizure of this heroin, which was the result of the DEA’s partnership with the Philadelphia District Attorney’s Office, will undoubtedly save lives across our region.”

As Alavarez-Mercedes was being stopped, investigators at the property observed a female, later identified as Zamary L. Roldan, exiting the property with a diaper bag, hand bag, infant and a container. Roldan was stopped and voluntarily consented to having her car searched. Officers recovered four racks of glassine packets containing heroin, $5,000 and the container contained 18.4 pounds of heroin. Roldan was taken into custody and arrangements were made for family members to take possession of the infant.

Alavarez-Mercedes gave officers consent to search his residence on Bingham St. and they recovered .5 kilograms of heroin, packaging materials and scales. They also found in an upstairs bedroom ledger books, passports for Gheral Alavarez-Mercedes and Zamary L. Roldan, and 13 counterfeit $100 bills.