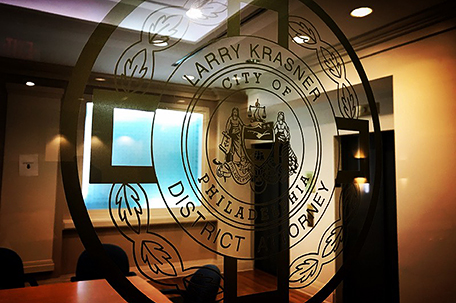 Philadelphia District Attorney Larry Krasner announced the arrest of more than 57 individuals for selling fentanyl, heroin, cocaine, crack cocaine, and other drugs in the Kensington section of the city. The arrests include not only street-level dealers but also individuals who controlled the enterprise, know as the Alameda Drug Trafficking Organization, at the highest levels.

“This multi-month criminal investigation centered on the intersection of Kip and Cambria Streets in the Kensington section of Philadelphia, the hub of this criminal enterprise that was not only a threat to public safety, but an entity that created revenue to the tune of more than five million dollars a year from the pain and misery that comes from drug and opioid addiction,” said Krasner. “I would like to thank all of our partners in Philadelphia and the surrounding area for making these fifty-seven arrests and the dismantling of the Alameda Drug Trafficking Organization possible.”

“We are privileged to have worked with our law enforcement partners in the investigation and attendant arrests of members of the Alameda Drug Trafficking Organization. With these arrests, and the anticipated successful prosecutions, many dangerous individuals will no longer be able to inflict harm upon the residents of our great city,” said Richard Ross, commissioner, Philadelphia Police Department.

This section of Kensington, as a direct result of the Alameda Drug Trafficking Organization (Alameda DTO), is one of the most dangerous and impoverished areas of the city. Between July 1, 2017, and July 1, 2018, the Philadelphia Police Department made over 700 arrests, 100 resulted in felony charges, and received over 300 hospital cases, about 75 percent were related to drug overdoses, within a four-block radius of Kip and Cambria Streets. Census data of that area shows that the majority of residents living there fall below the poverty line.

“I am so grateful to our law enforcement partners for the stunning success of this multi-agency effort. We work constantly to relieve our residents and neighborhoods of the stress, fear, and violence brought on and worsened by the opioid crisis. While our work is often behind the scenes, it is determined, and we will not stop,” said Councilwoman Maria D. Quiñones Sánchez  (D-7th District.).

Sixteen Alameda DTO properties, as a result of the extensive investigation, were targeted; and over the lifetime of the investigation law enforcement has confiscated:

The three key leaders of the Alameda DTO will face nearly 689 criminal charges including running a Corrupt Organization, Possession with Intent to Deliver heroin/fentanyl, and possession of an illegal firearm.