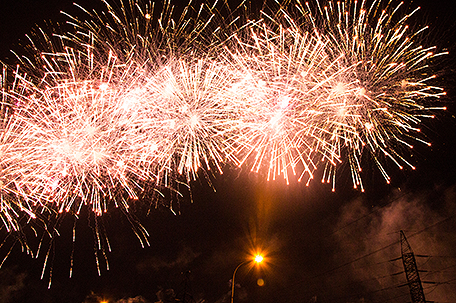 City officials on Tuesday issued a reminder about the dangers of setting off fireworks in neighborhoods. The City has received many complaints about fireworks going off at all hours – disrupting sleep, causing anxiety in people and pets, and generally interfering with residents’ quality-of-life.

“While we’re not certain why this is happening, we are certain that fireworks are incredibly dangerous,” Managing Director Brian Abernathy said. “Fireworks can cause catastrophic fires and devastating injuries, such as the 9-year-old Philadelphia girl who suffered life-altering injuries and a 12-year-old boy who lost a finger after playing with explosives. We understand the absence of  in-person festivals may cause some to crave the excitement of an enormous fireworks display over the river. But the simple fact is that these are extremely dangerous products and the risks far outweigh the momentary excitement of the explosions.”

It’s also against the law to sell fireworks on the street without a license. Residents should call 9-1-1 if they see someone selling fireworks illegally on the street or in a tent.

Residents who observe high-explosive fireworks or fireworks close to occupied properties, wish to report a late-night noise violation, or witness sales of fireworks, can dial 9-1-1 or call their local police district.

Residents should keep in mind that enforcement is difficult, particularly since the folks setting off the fireworks have usually left the area by the time officers arrive.