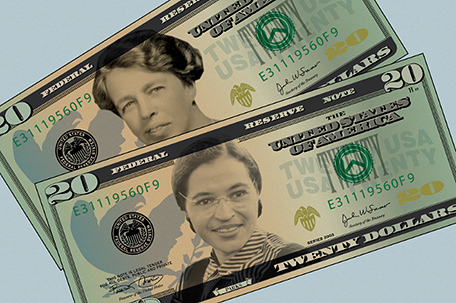 Philadelphia City Council unanimously passed a resolution introduced by Councilwoman Blondell Reynolds Brown urging President Barack Obama to issue an Executive Order to the United States Treasury to put a woman on the twenty dollar bill by 2020, marking the 100th Anniversary of the 19th Amendment, granting women the right to vote.

The movement is being led by Women on 20’s, an organization founded by Barbara Ortiz Howard.  Women on 20’s worked with a group of prominent women historians to select the original list of 100 names.  Those names, through a series of selection processes, including a national primary where citizens could cast their vote on the website www.womenon20s.org, have since been narrowed down to a list of four:  Rosa Parks, recognized by Congress as the “First Lady of Civil Rights,” she challenged racial segregation by refusing to give up her bus seat to a white man. Her arrest, and the ensuing Montgomery Bus Boycott became symbols in the struggle for racial equality and Civil Rights in the United States; Harriet Tubman, born a slave, she fled North to freedom, later making 19 trips back to the South as an Underground Railroad conductor, leading some 300 slaves to freedom. A nurse during the Civil War, she served the Union army as a scout and spy. She was active in the women’s suffrage movement after the war; Eleanor Roosevelt, acknowledged for redefining the role of First Lady. Used her newspaper column, radio and speeches to champion civil and women’s rights, often in opposition to her husband FDR’s policies. As a UN delegate and “First Lady of the World,” she drafted the Universal Declaration of Human Rights; and Wilma Mankiller, Principal Chief of the Cherokee Nation and first elected female Chief of a Native nation in modern times. Her 10-year administration, from 1985-1995, revitalized the Nation through extensive community development, self-help, education and healthcare programs for the Cherokee Nation’s 300,000 citizens.

Parks, Tubman and Roosevelt were selected through the primary voting process, while Mankiller was advanced to the final round because of strong public feedback that the public should have the choice of a Native American to replace President Andrew Jackson, particularly given his role in the Trail of Tears.

“I love the idea,” said Councilwoman Blondell Reynolds Brown.  “Generations of girls grow up absorbing these subtle ideas about gender roles, like seeing only men on the money, and only men have been President.  It makes a difference.  I would also note that if you conduct an informal survey, most of the pushback comes from men.”

She continued,”My vote was for Madam CJ Walker, who was the first female self-made millionaire in the United States, however, she did not make the cut in the voting process, therefore, I am leaning toward Rosa Parks.  How fabulous would it be if we could put our first African American and our first woman on the money at the same time?  It would be historic.”

Ultimately, when the final candidate is selected, Councilwoman Reynolds Brown will write a letter to President Obama urging him to put the winner on the twenty dollar bill by Executive Order.

Women have only appeared on lower circulated, less popular metal coins including the Susan B. Anthony  one dollar coin which was minted 800 million times before being taken out of circulation. The Susan B. Anthony coin was unpopular with the public, due in part to the fact that in size and coloring, it too closely resembled the quarter.  The Susan B. Anthony was replaced by the Sacagawea golden coin, of which only 3 million remain in circulation, and are most frequently used in vending machines for food and mass transit tokens.