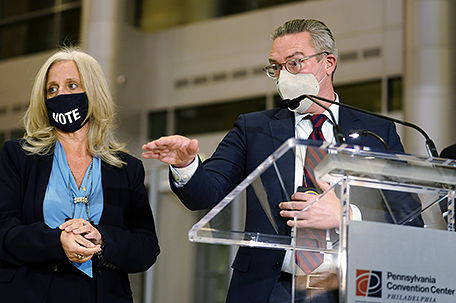 The Committee of Seventy’s Board of Directors announced Tuesday that Al Schmidt has been named president and Chief Executive Officer of Pennsylvania’s long standing nonpartisan advocate for better government. Schmidt will step down from his current, elected role as a Philadelphia City Commissioner and officially begin his new role at Seventy on January 3, 2022.

“After a diligent and thorough search process, the Board is very pleased to welcome Al Schmidt as the new President and CEO of the Committee of Seventy,” said Eric Kraeutler, Seventy board member and chair of the search committee.  “Al has dedicated his career to promoting government transparency, eliminating fraud and corruption, encouraging voter engagement, and ensuring safe and fair elections for all people. We look forward to working with Al to promote democracy, and to realize Seventy’s vision for a better Philadelphia. I also would like to express our appreciation to the significant number of well-qualified candidates we considered in the search process.”

Currently in his third term as City Commissioner of Philadelphia, Schmidt is one of three members on the bipartisan Board of Elections, where he serves as vice chairman. Since first being elected in November 2011, Schmidt has worked to modernize election operations, improve efficiency, and bring greater integrity to the election process. Schmidt is an advocate of open data initiatives and releasing previously unavailable election data to the public. He has also produced a number of election-related reports, including investigations that have exposed vulnerabilities in the election process and voting irregularities.

Prior to serving as a Commissioner, Schmidt was a senior analyst at the non-partisan U.S. Government Accountability Office (GAO) – the investigative arm of Congress. He assisted members of Congress, both Democratic and Republican, in conducting oversight of government agencies, programs, and policies – anywhere that taxpayer dollars were spent – to identify and eliminate waste, fraud, abuse, and mismanagement. Schmidt held a top secret security clearance and was responsible for offering recommendations to improve the efficiency and effectiveness of government agencies that resulted in improved performance, better interagency cooperation, and cost savings for taxpayers. Originally from Pittsburgh, Pa., Schmidt holds a Ph.D. in history from Brandeis University and a B.A. in history from Allegheny College.

“Following the unprecedented 2020 presidential election, the voting process in Philadelphia would not have been the success that it was without the work of the Committee of Seventy,” Schmidt said. “I look forward to stepping into this new role and building on the organization’s 117-year history of delivering democracy.”

Schmidt will assume the position currently occupied by David Thornburgh, who has led the organization as President and CEO since 2014.

In July of this year, Thornburgh announced that he would be stepping down to assume a new role with Seventy as senior advisor to help guide C70’s flagship reform efforts such as  fair redistricting and opening Pennsylvania’s primary elections to independent voters.

“In the last seven years, under David Thornburgh’s leadership, the Committee of Seventy has become a powerful force for holding local government accountable to the people, leading coalitions that move people from the margins of civic engagement to the center, and advocating for common sense government reform to voting laws across the state,” said the organization’s chair, former Phillies executive and US Attorney, Michael R. Stiles.

“The Committee of Seventy is stronger because of David’s dedication to this work, and I, along with the Board, staff, and key partners and stakeholders, look forward to Al Schmidt leading us just as strongly into the future. We are very fortunate to have this excellence in leadership continue at Seventy.”

Under Thornburgh’s leadership, Seventy tripled the use of its nonpartisan voter education resources in the 2020 election cycle, reaching more than a quarter million voters in its WeVote initiative.  Through its innovative Draw the Lines (DTL) initiative, Seventy became one of the state’s leading voices for transparency and reform in the state’s redistricting process.  DTL enlisted over 7,200 PA citizens in drawing their own congressional maps, bringing unprecedented citizen engagement to that consequential and once-arcane process. Seventy also grew and diversified its Board, created a Buchholz Fellows program to encourage new civic leadership, and grew its revenues to historic levels.

To learn more about the Committee of Seventy, visit seventy.org.