Philadelphia branch of the NAACP prepares for new leadership 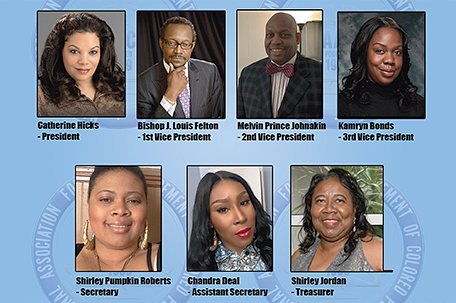 After what seems like forever, the national NAACP office has given the nod to the Philadelphia NAACP office that they can move forward with electing a new administration.

An election of new officers will take place Saturday, July 17, 2021. However, during a June 15 Philadelphia Chapter meeting  in the Nicetown CDC community room, only one name was put up for nomination for the office of chapter president — Catherine Hicks.

In a future article, SUN readers will be advised of a swearing-in ceremony. For almost 12 months, the chapter had been quiet, due to the pandemic. They still have their office on Germantown Avenue, but volunteers worked from home.

Last August, Minister Rodney Muhammad, who has been the local chapter president for almost eight years, posted a cartoon on Facebook which depicted someone who appeared to have stereotypical Jewish features holding down — or holding back — a group of what appeared to be, African-American people. It was a cartoon. Well, that cartoon incensed quite a few people in the Jewish community and leaders of several well-known Jewish organizations along with other leaders. They called for Muhammad to resign.

For his part, Muhammad did apologize, saying he never meant to offend anyone and that it was not his intent. He remains the chapter president as of now.

The chapter had two situations happening  over the past year, Muhammad, while appearing to be silenced, remained in his position as president, which he holds to this day. However, at the same time, the coronavirus pandemic was raging. Like much of the rest of the world, the NAACP office on Germantown Avenue, for all intents and purposes, was pretty much closed for public health concerns.

Keep in mind the fact that the NAACP is a totally volunteer organization, Hicks, currently a member of the chapter’s executive board said. “They receive no compensation for their work, which supports the African American community on a number of levels, including as advocates for legal justice — this work continued despite the challenges of the past year, she said.

“When the worst of COVID-19 was still hitting hard, we had a small core group of volunteers who took turns coming into the office, taking calls, and listening to voicemail messages, then turning those messages over to the proper people within the chapter and having concerns addressed.” she said.  We didn’t just quit and give up.”

As an active member of the Philadelphia chapter of the NAACP for more than 15 years, it was about two months ago that Hicks says she decided she was going to step out and run for president.

She consulted with Muhammad, Sheriff Rochelle Bilal — who also served on the executive board for many years, including a stint as board secretary — and with Bishop J. Louis Felton, 1st vice president of the historic chapter about her decision to run, and received helpful feedback. The conversation with Bishop Felton was especially important to Hicks, given his position with the organization, she said.

“Bishop Felton gave me his nod of approval, and he let me know that his plan was to run for first vice president again,” Hicks said. “I felt with Bishop Felton, Melvin Prince Johnakin as 2nd vice president, and Chandra Bonds for 3rd vice president, along with the rest of our slate, making the NAACP front and center in the minds of people from the African American community once more, we would have a good chance to be the slate elected.” .

“Our city is in crisis and has been for a while now,” Hicks continued. “Philadelphia needs every single person in this city to join us now in creating a city that is equitable, open to all, and fair.  As president of the NAACP Philadelphia Chapter, I will work with anyone, anywhere, if it means we can prevent more lives being lost to violence, create opportunities for our youth to thrive economically and to ensure families have the vital resources they need and the education they deserve. “

“This does not mean we won’t hold people to account when they let us down, or fail in their responsibility,” she cautioned “We will speak out. There has to be accountability if we are to move Philadelphians forward.”

“The time is now for the NAACP of Philadelphia,” Felton said. “Never has the need for our collective and unified voice been more urgently necessary [for] the ‘now.’ The time is now for reconciliation and healing. ️‍We have weathered a serious and deadly pandemic, yet a spiritual pandemic is upon our doorstep. The real issue is not whether we are faced with crises; the real issue is, are we together as a people?”

Hicks says she is ready and prepared to lead the Philadelphia Chapter forward. She comes into her candidacy for president with a wealth of NAACP leadership experience from being on a number of the committees as chair, and from having attended numerous PA State NAACP conferences and National NAACP conferences.

In her professional life, Hicks has worked in public relations for several entities, including the Philadelphia Sheriff’s office in past years. For the last six years, she has taken up the reins as publisher and co-owner of the Philadelphia Sunday SUN newspaper upon the passing of her fiancée J. Whyatt Mondesire, founder of the SUN newspaper, who was a past president of both the Philadelphia Chapter and Pennsylvania State Conference NAACP.

To vote, you must have a membership with the branch at least 30 days before the Philadelphia chapter election. You must be a Philadelphia resident or work in Philadelphia. You can apply for membership online, but it has been recommended that completed membership forms should be hand-delivered to the Philadelphia NAACP office, which is located at 4458-B Germantown Avenue, Phila. 19140.

Put your envelope through the mail slot if no volunteers are in the office when you stop by. The office number is (215) 455-1011.