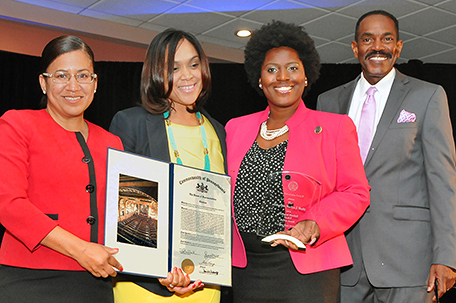 “ We should know now that human progress and justice does not roll in on the wheels of inevitability, but through the tireless efforts and persistent work of dedicated individuals,” said Minister Rodney Muhammad, Philadelphia Branch NAACP president. “I am grateful to all those of the NAACP.”

This was an especially meaningful year for The Philadelphia Sunday SUN, which celebrated its silver anniversary and the memory and legacy of founder/publisher and Philadelphia civil rights leader J. Whyatt Mondesire on his birthday (October 14th). Mondesire led the organization as Philadelphia Branch and State NAACP President for nearly two decades. A portrait of Mondesire was displayed on the podium during the reception along with other notable civil rights leaders. SUN Publisher Catherine Hicks and fiancée of the late Mondesire, was recognized as a media sponsor of the event. “With the current social climate of discrimination and racism, the SUN will continue to support the important work of the NAACP and its leadership under President Muhammad,” said Hicks who also serves as a committee member for the Philadelphia Chapter. 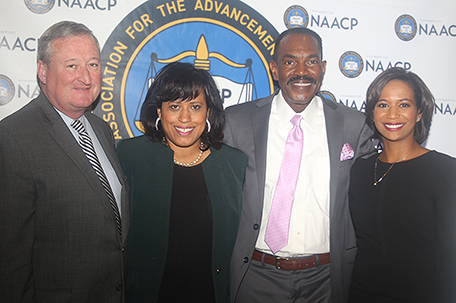 Philadelphia City Council President Darrell L. Clarke presented a citation to honoree Sharon Powell and was joined by his mentor, former Mayor John F. Street. Powell is a skilled professional communicator, has held many significant positions and has also worked closely with our community and elected officials.

Honoree Edward Jacobs, Jr. is a proud North Philadelphian. He received great support from many relatives and friends who joined the community in acknowledging the tremendous, selfless work he has done to feed the homeless.

“Recognition by the NAACP is a great observation to be shared with a public in need of knowing that perceived racial injustices will be addressed by the NAACP,” Ronald J. Harper, Esq. said I am pleased to be recognized for providing a needed service for people who have usually exhausted more popular publicly funded support.  Man cannot live by bread alone; an award does invigorate”.

Harper was also well supported by a host of family members, friends, professional associates and Zion Baptist Church Trustees, where he serves as board president.

“As a proud member of the NAACP, I was deeply honored to receive from one of the oldest chapters of the NAACP, the 2017 Thurgood Marshall Justice Award,” said Mosby, the youngest chief prosecutor of any major American city. “It is truly a humbling experience to be recognized in memoriam of a legal pioneer that lit the torch for justice and equality in this country. In the racially divided times in which we currently live, I stand tall on the shoulders of this giant and will continue to fight to ensure liberty and justice for all.”