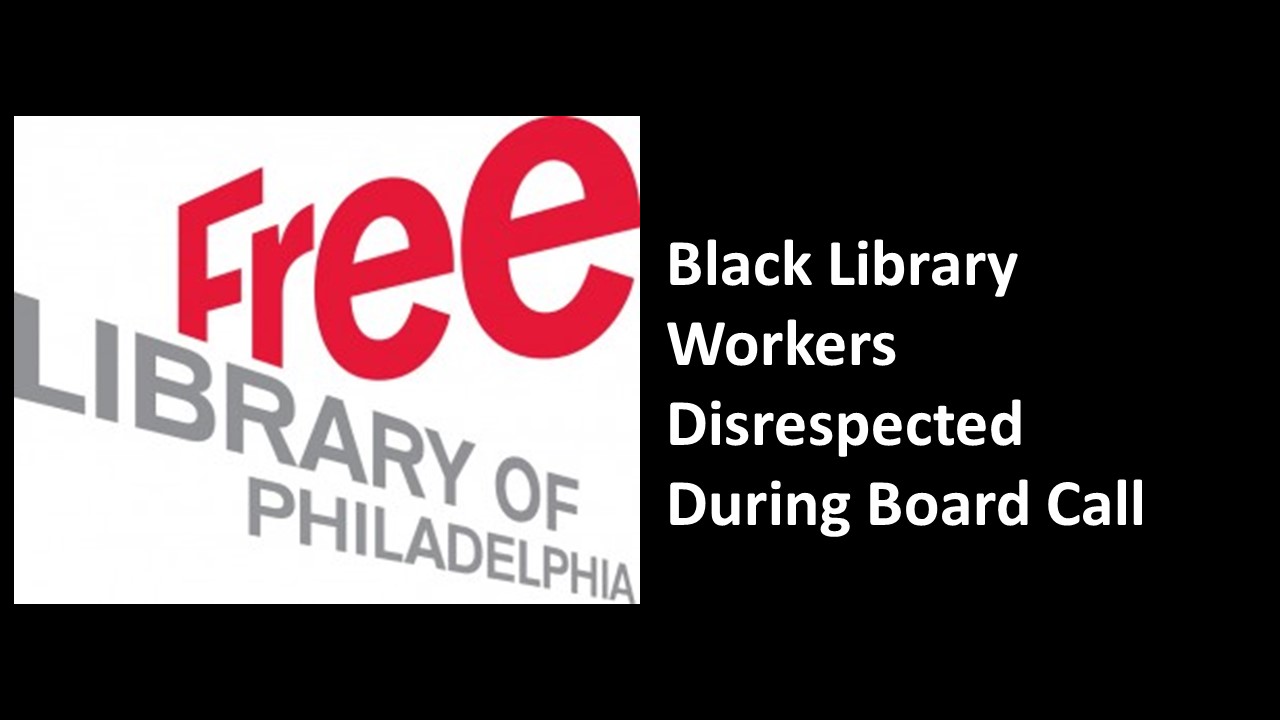 “It looks like there are several people [board members] that aren’t paying attention to Alexis, which is incredibly disappointing,” commented meeting attendee Kay Butcher on Zoom chat.

The Free Library of Philadelphia board trustee members held an hour-long public meeting via Zoom on Tuesday. The meeting came on the heels of Black workers posting an open letter detailing the racism faced while working at the library and the lack of COVID19 worker protections that resulted in the resignation of the 12-year executive director Siobhan Reardon. (See open letter here).

The meeting, which was more of a listening session, was a cringeworthy watch as library board trustee members (including some African American board members) seemed disinterested. This also includes an emeritus trustee listed on the library’s website that could be seen having a personal conversation during the call while members of the Concerned Black Workers of the Free Library of Philadelphia were speaking.

Others were casually and nonchalantly drinking coffee while library workers were speaking appearing to be dismissive and unconcerned towards the call’s participants.

Alexis Ahiagbe, Andrea Lemoins and Kalela Williams from the Concerned Black Workers of the Free Library of Philadelphia represented the group on the call.

“It looks like there are several people [board members] that aren’t paying attention to Alexis, which is incredibly disappointing,” commented meeting attendee Kay Butcher on Zoom chat.

Attendee “TN” noted, “Robert Heim is not even paying attention to Alexis,” he said of the board member.

The public meeting that was advertised with only few days notice was a surprise to even the library workers on the call who found out about it from a news outlet.

The letter also resulted in authors canceling their appearances for the library in solidarity with Black workers.

Attendees took the board to task on their denial of claiming not to know about the racism and inequities Black employees faced.

Alexis also demanded that worker input be included in the search for a new director and challenged each board member to personally commit to anti-racism or resign.

Margaret Darby who attended the Zoom meeting, said as a member of the public, “I have also witnessed Siobahn’s refusal to respond to City Council requests to make the board, more diverse.”

There are still demands for board chair Pamela Dembe to resign in light of her steadfast defense of Siobhan Reardon’s leadership.

As an attendee noted on the call that its not enough just to say Black Lives Matter.”

SUN EXCLUSIVE: COPY OF VIDEO: Philadelphia Library Board Meeting with the Concerned Black Workers of Free Library of Philadelphia July 27, 2020