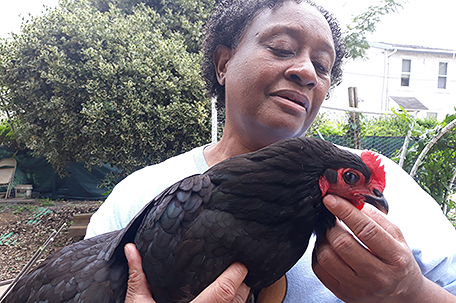 Moni Jones exclusive, Ms. V. shares her story for the first time anywhere with The SUN

Philadelphia and Detroit are the few major cities in the U.S. where raising backyard chickens is illegal.

Not only do backyard chickens provide a great source of free eggs for your family, but they provide a form of pest control, as they love to eat ticks, mice, snakes, termites and spotted lantern flies.

Prior to 2004, raising chickens was legal in Philadelphia. Then, it was banned (more on that later).

Ms. V. never thought in a million years her life would be dedicated to advocating for the right for Philadelphians to raise hens as pets in their backyards.

25 years ago, Ms. V. asked her late husband, who is recently deceased, if they could get a chicken in the backyard of their Northwest Philadelphia home.

The person who previously owned the home had a pony. Ms. V. wanted something a little different.

Her husband was opposed.

Her husband was not even remotely interested in revisiting the topic of having chickens as pets.

Perhaps this was because people think of loud roosters which are the male chickens. The female chickens, called hens, are suitable for backyard raising.

Ms. V. was shocked at discovering the unusual sighting in her backyard.

She called a friend.

After scrambling — no pun intended — to find the chicken’s origins, she discovered that the hen came from a neighbor’s house.

Ms. V. still had no intentions on keeping it and her neighbor retrieved the chicken.

Days later, the chicken flew over her neighbor’s 7-foot fence when they opened the coop door. The runaway chicken escaped to Ms. V’s yard — again.

This time on her steps.

“I get up to make some breakfast, and my cat is sniffing hard at the back door,” Ms. V recalled.

“I opened up the door, and it just was, just sitting there like it was waiting for me to open up the door.”

The apologetic neighbor said they would get rid of the chicken or Ms. V could keep it since they could not keep the bird from escaping to her yard.

“I’ll keep it!,” Ms. V told her neighbor, noting that it was an unusual feat for a chicken to be able to fly over a 7-foot fence.

Ms. V. saw this as a sign from her late husband.

“I was in a dark space, I lost my best friend,” she said of his passing, noting she was in a deep depression.

“Not only did Helen give me purpose, but she saved my life.”

Ms. V. had no idea how to raise her new pet hen, Helen.

She did some research.

That’s when she found out about Philadelphia Backyard Chickens and became a member.

Founder Maureen Breen shared with Ms. V that hens are social animals that need to interact with other hens. She informed Ms. V that buying another one was a necessary part of raising Helen.

While having more than one chicken was not in the original plan, Ms. V. is now an enthusiastic owner of four hens.

Then came the pandemic.

Prior to the pandemic, Ms. V. was referred to as the “crazy chicken lady.”

During the pandemic, when supermarket shelves were bare of basic food necessities and some prices skyrocketed, suddenly Ms. V became affectionately referred to as the “lady with the eggs.”

Her four hens, that are free range, produce well.

In a city like Philadelphia where food insecurity is already a crisis, Ms. V was able to provide free eggs for her community and beyond during the pandemic, compliments of her hens whom she refers to as “her girls.”

Chickens have a life expectancy of 10 years if raised properly. Ms. V keeps her hens for their entire life, after they no longer have the ability to lay eggs.

Although the chickens have free range in the entire yard, Miss V.  keeps their coop and run area portions enclosed with fencing to protect them from prey.

“These are my babies –, I show pictures to anybody that I can show them to.”

Each of Ms. V’s hens are from a different breed.

But for Ms. V., there is a fear that every hen owner has in Philadelphia.

“Every single day, we wonder, are we going to get notice to have to surrender our pets. That’s what we go through,” she said.

ACCT Philly (Animal Care and Control Team) contracted by the City of Philadelphia, can issue citations or warnings to those who raise backyard chickens. Fines may also be issued.

“In 2004 chickens were outlawed in the city of Philadelphia,” said Breen, an Associate Clinical Professor of Accounting at Drexel University, who lives in Northeast Philadelphia raising her own backyard chickens.

“Several years after that about 10 years ago, the Weaver’s Way Coop in Mt. Airy started a Facebook group called Philadelphia Backyard Chickens because they had a lot of people coming into their pet store and asking for chicken feed.”

Customers were buying a lot of feed, said Breen of the group that has 2,500 members.

Although the backyard chicken group is still great colleagues with the Weaver’s Way Co-op in Mt. Airy, they have moved on to continue their mission of legalizing raising chickens in Philadelphia.

“We drafted a bill, and we have shared that with a [Philadelphia] council person who has asked not to be identified at the time, but that council person has said that they are willing to discuss this bill in the fall.” ~Maureen Breen

Raising backyard chickens was outlawed in 2004 in Philadelphia — a broad sweeping law that banned residents from raising certain kinds of animals on their property. There was a sentiment at the time that the issue of animal odors in upper Northeast Philadelphia was being ignored.

“Northeast Philadelphia being the newer section of the city, for a long time this area held on to some of its urban agriculture, which it in essence lost,” said Breen.

At the time it was outlawed by City Council in 2004, the bill was introduced by Councilman Brian O’Neill.

“In one grand sweep, they outlawed turkeys, ducks, geese, chickens, pigs, goats and sheep. And that’s a really broad reaching law. So I think the law may have overreached a bit in trying to solve a problem that was happening at the time,” said Breen.

O’Neill acknowledged during that time that he had heard of some really good stories about Philadelphians raising backyard chickens and that City Council should perhaps consider revising and amending the law in the future.

Unfortunately, that didn’t happen — not right away, at least.

In 2019, Councilman Bobby Henon introduced a bill to revise the law.

“We have quite a few who support it, said Breen (her statement not referring to Henon or any councilperson specifically).  “I have a feeling we do have enough support [in] City Council to pass it. We drafted a bill, and we have shared that with a council person who has asked not to be identified [at the] time, but that council person has said that they are willing to discuss this bill in the fall.”

“There are now co-sponsors, around City Council,” Breen continued. “Our group goes down to a City Councilperson every couple of days— to teach, for one, and we try to get them to be willing to support this.

“I think we learned during COVID, that our food supply system is fragile,” Breen said. “Many of us were able to share eggs with our neighbors, when they weren’t available in the store or they might have been expensive, and they’re [eggs laid from home-raised hens] are much better eggs, anyway.

I think maintaining avenues through which people can sustain themselves with food is very important.”

“I also think we’re seeing the spread of viruses and things like that in our commercial chickens because they’re kind of all bred from the same box,” she continued. “They’re genetically very similar. So if [a] virus comes into that stock of chicken, it can spread very quickly, because they’re very identical in their immune systems, whereas those of us who are maintaining backyard flocks are contributing to types of biodiversity.

“I have two different breeds in my flock right now, and they’re both different stocks, so I think that we’re helping with our food supply chain.”

Do you want to raise backyard chickens? (spacing requirements and feeding)

“The bill that we have introduced has minimum safety requirements for the chickens.” Breen said. “When you combine those minimum space requirements with the normal setbacks that we have for things like sheds and dog houses, there probably might be some yards in Philadelphia that will not be able to accommodate it. But, I live in a space in Northeast Philadelphia. I would say I have a pretty standard yard in this neighborhood.  And, that’s more than enough space for my chickens. In their indoor area they need at least one square foot, that’s a little bit tight, but one they can get by on.  You can have two [feet] in their outdoor area, maybe one square yard. I try to keep them at one foot inside, one yard outside. So if you’re going to have three chickens you need nine square yards. That is a nice square feet I would say if you have a space, you know 10 by 10. And then around 12 by 12 yard.”

“My girls are free range,” Ms. V. said. “But in their coop area and their run area, they have a little over 200 square feet. So they have plenty of space to be. You can feed them your scraps from your dinner –and your left leftovers. You can feed them organically.You can feed them all sorts of things.  But, particularly scraps, feeding them scraps will [keep] waste out of the landfills. A lot of people don’t think about that — we throw away so much.”

-Never buy a rooster. Because of the city’s noise ordinance, these male chickens are not suitable for raising as backyard chickens. They can be loud and also aggressive towards the female hens.

-Same hygiene practices you use for your cats and dogs — same applies for your hens. Always wash your hands after handling or touching your chickens. (Also keep hand sanitizer handy in the backyard).

-For health reasons, never kiss chickens. They are animals, not meant to be kissed.