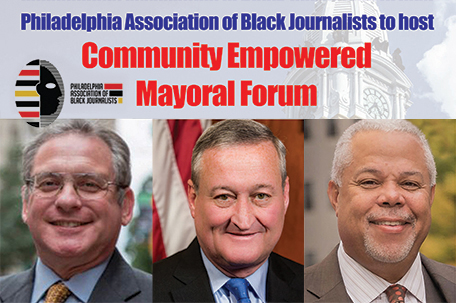 Doors open at 6 pm in the Bonnell Auditorium of Community College of Philadelphia (CCP), which is entered from 17th Street, just south of Spring Garden St.

With roughly a quarter of Philadelphians living in poverty and fewer than 35% in possession of a four-year college degree, the forum will focus on the candidates’ plans to impact the lives of working class and poor.

The questions will address concerns that are common topics in local barbershops, churches and other community venues and include concerns regarding educational quality and access, unemployment and job training, the opioid crisis, discrimination as well as public safety.

“In this critical primary election season, facts matter.” said Manuel McDonnell-Smith, PABJ president and news assignment editor at NBC 10 Philadelphia. “We are providing a platform for each candidate to be on-the-record regarding critical issues that are most important to the city’s communities of color before voters get to the polls on Election Day.”

April 22 is the last day for Philadelphians to register to vote and still be eligible to cast a ballot in the May 2019 primary election. Students and staff of Community College of Philadelphia will conduct a voter registration drive on campus immediately preceding and during the forum.

The forum is being hosted with the support of PABJ’s Community Partners including the Philadelphia Chapter of National Black MBA Association, Inc.; the National Association of Health Services Executives (NAHSE) Delaware Valley Chapter and The Philadelphia Sunday SUN, and The Parkside Journal Newspaper.

“PABJ’s Community empowered mayoral forum” will be streamed live on Facebook via the PABJ Facebook Page. Additional live coverage will be available on WURD AM/FM Radio. Additional content from the panelists will be featured in their respective publications.