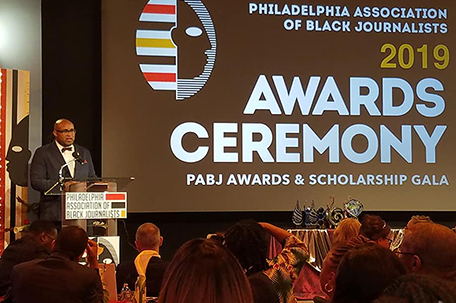 Attendees of the gala, which was held at the WHYY Studios on Independence Mall on Nov. 2, also got the news that the Lenfest Institute — the non-profit organization that owns the Philadelphia Inquirer and the Philadelphia Daily News — was making a big investment in the founding chapter of the National Association of Black Journalists.

PABJ will receive a $50,000 grant from the Lenfest Institute to accelerate the chapter’s growth and pathway to sustainability. Both organizations have been partners in innovative initiatives around community engagement, journalism entrepreneurship and cutting-edge training opportunities aimed at empowering and elevating the Philadelphia-area’s  Black journalists.

“The Lenfest Institute is honored to partner with the Philadelphia Association of Black Journalists,” he said. “PABJ supports local journalists of color to advance in their careers and to build equitable news media businesses and benefits all of Philadelphia, helping assure that the city as a whole has the diverse, equitable and representative news coverage it needs and so richly deserves.”

“This extraordinary gift represents an extraordinary opportunity to innovate and remake what Black Journalism will look and feel like in Philadelphia for years to come,” Smith said. “My gratitude goes to the Lenfest team for the vote of confidence in our plan and jointly believing in our dream.”

This year’s gala was co-hosted by NBC-10’s Aunyea Lachelle and Quincy Harris, host of Fox-29’s “The Q Show” and honored a group of industry professionals for their contributions to local journalism and to the community as a whole. It was also a chance to give a group of journalistic pioneers their moment in the sun.

“The [PABJ] founders did a tremendous job in welcoming me and making me comfortable in Philadelphia,” Vernon Odom, retired 6ABC reporter, said. “They helped me get it, so I stand on their shoulders. I hoped to be able to do the same thing and to keep the faith going. I’ve always strived to give people the truth and the hard facts. This ceremony means a lot for journalists.”

“For this to be the oldest organization dedicated to the advancement of Black news and Black journalists, it really is a tremendous honor to be honored by PABJ tonight,” Aliya Z Khabir,  principal consultant, AZK Communications, LLC and PABJ’s  Media Professional of theYear honoree, said. ” Especially being that I’m not a journalist, but a media professional. It is just an honor to be recognized for the work that we do behind the scenes that aids journalists,”

“I’m really humbled and I feel very grateful because I love PABJ,” Cherri Gregg, community affairs reporter for KYW Newsradio, said. “I’ve been a member for 10 years. This is the organization that gave me my confidence, my network, my mentors and helped me find my path into this business. So, to be honored by this organization that I call family on the tenth, literally like the 10th anniversary of me joining. There’s nothing like it,”

Thanks to an increase in partnerships and a surge of support, the organization gifted IPads to every student scholarship recipient. PABJ also increased the scholarship amounts and number of scholarship awards. The amounts range from $500 up to $1,000 each.

PABJ is a non-profit organization dedicated to the development of local Black journalists, students and media-related professionals. Their mission is to promote diversity in the media. Formed in 1973, PABJ is the founding chapter of the National Association of Black Journalists (NABJ). The award and scholarship gala is one way in which the organization empowers Black journalists.