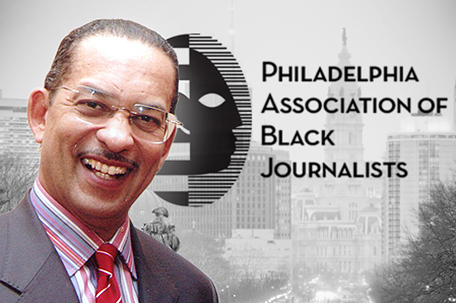 On Sunday, October 4, the Philadelphia Association of Black Journalists (PABJ) was heartbroken to learn of the death of longtime member J. Whyatt “Jerry” Mondesire. In his passing, we and other journalists recall the man who was always our conscience.
Mondesire, 65, was an early member of PABJ, helping to build the foundation for the organization. He started his journalistic career at the Baltimore Sun as a writer and the Philadelphia Inquirer as a city-desk editor. He later became a top staffer for the late Congressman Bill Gray.  Mondesire took over the Philadelphia chapter of the NAACP in 1991, and was a relentless crusader for human and civil rights. He was an advocate for the community that he loved as publisher of the PhiladelphiaSunday Sun and as a community affairs host on WDAS-FM radio show, Freedom Quest.
Jerry loved PABJ and PABJ loved Jerry.  He was paid and active member of PABJ until his death and was a vocal member of the PABJ Media Monitoring Committee, he frequently attended PABJ meetings and events.  Because of Jerry’s deep love for PABJ and its members, his fiancè and longtime PABJ member Catherine Hicks, along with the Mondesire family, requested that PABJ set up the “PABJ J. Whyatt Mondesire Scholarship Fund” to help celebrate Jerry and his love for journalism.  PABJ is proud to make it a reality.
PABJ will award the first J. Whyatt Mondesire Scholarship at its annual Awards and Scholarship Banquet in 2016.  PABJ will administer with scholarhsip and announce the criteria in spring/summer of 2016, with the help of the family.  In the meantime, the family has asked that in lieu of flowers, donations be sent to help establish the Fund.
DONATE TO KEEP JERRY’S LEGACY ALIVE
To donate to the J. Whyatt Mondesire Scholarship Fund follow the instrictions below:
1. Check Donations.  Write checks to “PABJ J. Whyatt Mondesire Scholarship Fund” and mail to J. Whyatt Mondesire Fund c/o PABJ, PO Box 8232, Philadelphia PA, 19101
2. Online Donations.  Go to www.paypal.com and send money to[email protected] and in the special comments section write: “J. Whyatt Mondesire Fund.”
3. Cash Donations. Cash donations can be made at PABJ monthly meetings.  Receipts will be provided.  Details on the time, location and dates of all monthly meetings are located on the phillyabj.org home page under meetings.
PABJ is a registered 501(c)(3) non-profit organizations.  All donations to the J. Whyatt Mondesire Scholarship Fund are tax deductible.

Philadelphia Association of Black Journalists’ statement on the death of E. Steven Collins