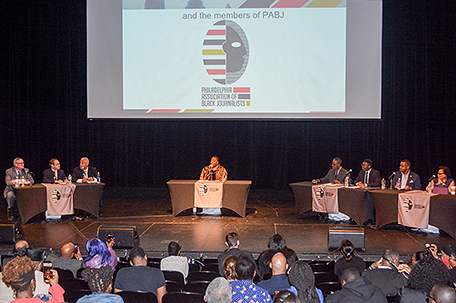 The hour-long match of wills, egos and agendas was the first such event held during this primary season.

The Philadelphia Association of Black Journalists’ (PABJ) hosted a Democratic primary mayoral forum on Monday, April 22 in the Bonnell Auditorium of Community College of Philadelphia (CCP).

The event was streamed live on Facebook via the PABJ Facebook Page. Additional live coverage was provided from WURD AM/FM Radio.

April 22 was also the last day for Philadelphians to register to vote and still be eligible to cast a ballot in the primary election, which will be held on May 21. Students and staff of Community College of Philadelphia conducted a voter registration drive on campus immediately preceding and during the forum.

Andrea Lawful Sanders, a columnist for The Philadelphia Sunday SUN, acted as moderator for the hour-long event.

The evening’s panelists — Denise Clay, co-host and producer, Mark & Denise in the Morning, WWDB 860AM and writer for the Philadelphia Sunday SUN; Didier Delfin, editor-in-chief, The Vanguard Student Newspaper at CCP; Ernest Owens, writer-at-large, Philadelphia Magazine and Vincent Thompson, news editor, WURD AM/FM Radio — were all afforded an opportunity to ask at least one question of the candidates, although in many instances, those questions were sidestepped when some candidates insisted on using their allotted response time either going on defense tangents or addressing totally different topics.

Lawful-Sanders began the evening’s questioning by asking the candidates about how they would work with agencies within the criminal justice system to incentivize their commitment to sensible justice reform practices, citing that two of the largest workforce for government agencies in Pennsylvania have stated as recently as March of 2019 that criminal convictions are a major factor in keeping people in poverty.

Butkovitz stated that broad-brush disqualifications are problematic in this regard.

“I think the City and state ought to work to create those compartments that are not on a generalized basis disqualifying people on a mass basis from governmental employment,” he said.

Kenney — who focused heavily on his record throughout the evening — pointed to his administration’s success in reducing the prison population by 40%, among other accomplishments.

“ In addition, we’ve been working with our criminal justice partners — not just the district attorney’s office — but also with the defender and with the courts, this has a lot to say about what happens. We’re also working on eliminating cash bail, and we’re working to reduce the number of fines and fees that people have to pay once they’re out.”

Kenney also spoke about job training for returning citizens and the impact of marijuana decriminalization in criminal justice reform.

Williams raised issues surrounding “stop and frisk” policy, “ban the box”, and employment of formerly incarcerated citizens. He also spoke about the work he has done to address them all as a state senator, including as the prime sponsor of Senate Bill 14, which amends Title 42 (Judiciary and Judicial Procedure) of the Pennsylvania Consolidated Statutes in judicial boards and commissions, providing for the adoption of guidelines for administrative probation.

The whole maelstrom surrounding the City’s current “Stop and Frisk” policy, Kenney’s previous campaign pledge to end it and the process thereof took up a large portion of the discussion time, with the mayor attempting to defend that progress.

Kenney went on to state that in spite of the declining number of stops, more than three times as many unlawful guns have been successfully taken off of the street.

This prompted a strong response from Kenney’s challengers as Thompson asked them to clarify their respective positions on the controversial policy, given the fact that while the practice has been abused and oftentimes ineffective, it’s still legal.

Williams went on to describe some the innovative ways that technology, crisis centers and other partnership based initiatives are being used in crime prevention that are far more effective than stop and frisk.

After speaking to the injustices of the practice, Butkovitz also challenged Kenney’s continual use of the policy.

“If the mayor had a real commitment on this issue he certainly sounded like he had a commitment on it in 2015 when he ran for office – there were no “ifs” or “buts” then — he would simply do it instead of trying to rationalize and come up with an explanation about why this would be a good thing after all.”

After citing sources and lists that reflect crime statistics in the city, Thompson went on to ask the candidates how they would address Philadelphia’s widespread homicide crisis.

“Let me just say that one homicide is too many,” Kenney said. “We deal with these numbers all the time as if they are not human beings but statistics. There’s a family associated with each of those numbers on that list.”

Didier Delfin, editor-in-chief of The Vanguard Student Newspaper at CCP, asked the candidates to clarify their positions on the importance of increased state funding for Pennsylvania’s colleges and universities.

Williams—the only state official participating in the forum—used his response time to expand on the previous gun violence question posed by Thompson and confront Kenney’s policies, totally sidestepping the question, which in turn shifted the focus of the debate. Butkovitz followed suit and ran the clock out.

Clay — who was the next panelist — pulled no punches regarding how this diversion annoyed her, and generously forfeited some of her allotted time, demanding that the candidates answer Delfin’s question.

“Those of us in the Commonwealth are working to increase this year’s budget for Community College,” Williams said. “Locally, I’m not sure what is occurring. I do feel that it’s a priority, because frankly, many of the students who graduate from public schools in Philadelphia go to Community College to prepare themselves for a career.”

Clay focused on issues surrounding the upcoming police department contract, police malfeasance and the stop and frisk policy, which was determined to be constitutional in the Supreme Court’s Terry v Ohio decision.

“We have fired a number of police officers over the past three years for doing some pretty outrageous things,” Kenney said. “The way we did that is because state law is what it is. It’s part of state civil service regulations for police that allows police to appeal those dismissals.”

Butkovitz challenged Kenney’s efforts regarding procedure in his response.

“One of the principals of collective bargaining is that you get something for giving something,” he said. “[In the last contract], the police got the ability to move outside of the city…They got a very good wage package. One thing you have to do as mayor is that you have to be a negotiator.”

“Whoever is police commissioner, there will be directives,” Williams said.

Owens asked the candidates to address their plan to address diversity as it relates to City employment and qualified African American applicants.

Kenney cited statistics regarding the current racial makeup of the City’s workforce, including that of his cabinet in a response, which roiled both Butkovitz and Williams, who felt that it reeked of tokenism and hypocrisy, given Kenney’s overall record in this regard.

“To sit and count of the Black people as if they’re some sort of trophies like “that’s my Black friend” in front of us as a group is insulting,” Williams said after stating his desire to include African Americans from all walks of life on his transition team, if elected.

Didier had the last question, which focused on the digital divide and increasing job opportunities.

Williams proposed introducing a municipal bank to address economic disparity issues head on, while Kenney pointed to building upon the work force development program already underway with Community College to help increase the procurement of certifications and licenses. Butkovitz spoke of increasing community outreach in the area of lucrative longshoreman jobs and utilizing the current Rebuild program to open up more positions for the City’s African American population in the areas of the building trade and construction industry.