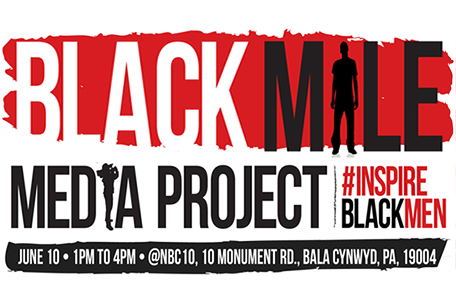 The Philadelphia Association of Black Journalists (PABJ) will host the Black Male Media Project on Saturday, June 10, 2017, 1PM-4PM at NBC 10 Philadelphia, 10 Monument Road, Bala Cynwyd, PA 19004. The in-depth discussion is in partnership with the National Association of Black Journalists new program to help change the lives and images of Black men in the news and in society. The NABJ Black Male Media Project is a nationwide effort to open doors and change the narrative of Black men.

“PABJ recognizes the critical nature of this nationwide effort to open and change the narrative of Black men in media, as it reflects our founding mission,” said Melony Roy, PABJ President. “We look forward to helping create necessary dialogue about our community and workforce development, as well as fostering meaningful relationships with those also committed to this campaign.”

The NABJ Black Male Media Project will launch its first program in various cities across the United States on Saturday, June 10, 2017. The program is designed to inspire, support and develop training and mentorship opportunities for Black men working in journalism and media and those that aspire to.

“It is important to me as a father of a young Black male to be able to take this opportunity not only to be a role model, but to show my son and other young Black men that there are positive images of them in the media,” said Sheldon Sneed, PABJ Vice President of Print and Co-Chair of PABJ’s Black Male Media Project. “In addition, we need to change the perception of how we are viewed and it starts with us.”

The event will include workshops and sessions aimed at cultivating skills and broadening the networking opportunities for black men in media. Moderated by Ameem Akbar, Dean of Students at YouthBuild Philadelphia Charter School, featured speakers include:

This program is not exclusive to black participation and is aimed at helping all people engage around the value of black males working in newsrooms and media.

To register for Black Male Media Project visit: BMMP.Eventbrite.com. For more information on how you can support the national initiative visit nabj.org.

Philadelphia Association of Black Journalists’ statement on the death of E. Steven Collins