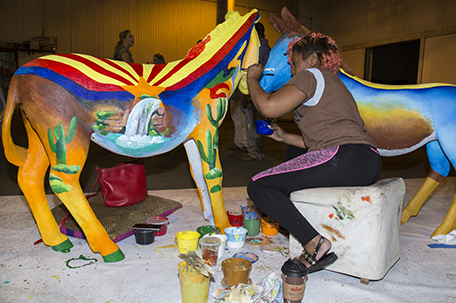 The Philadelphia 2016 Host Committee for the Democratic National Convention today showcased the painting of some of the 57 fiberglass donkeys that will be deployed as part of the Host Committee’s Donkeys Around Town program. The painting process will be completed within the next week. The donkeys will be installed at their staging locations, a full list of which will be released in the next few days, by July 1st. They will be featured at 48 different, publicly accessible locations throughout Philadelphia and will be on display through September 5th.

“We are excited to offer a sneak peak of our Donkeys Around Town as they receive their finishing touches from the local artists who are painting them,” said former Pennsylvania Governor and Philadelphia 2016 Host Committee Chair Ed Rendell. “This project is a fun way to engage the delegates coming to Philadelphia and will enable them to connect with Philadelphians and the local arts community. Keep an eye out for them beginning July 1st!”

“Mural Arts is proud to provide a valuable bridge to the local artistic community, and the Donkeys Around Town project has been a fantastic opportunity all around,” said Jane Golden, executive director and founder of the City of Philadelphia Mural Arts Program. “The project will showcase the creative gifts of so many talented artists during the DNC, and we look forward to seeing their playful works of public art throughout the city this summer.” 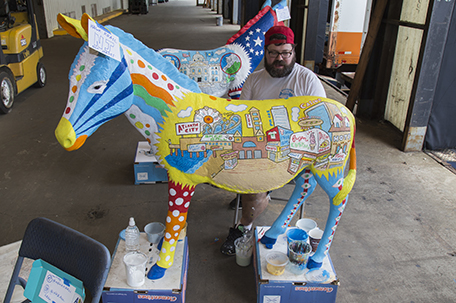 “Thank you to all of the artists who went above and beyond to rearrange work schedules, who sacrificed family time, and who squeezed long days of painting in! It has been a pleasure to help coordinate the resources and data for this project through ArtJawn.com,” said Caryn Kunkle, of ArtJawn. “These donkeys are available to take home! Support local Philadelphia artists by bidding on your hometown donkey.”

The artists that were present for the donkey painting are:

Brian Cesario is originally from the Philadelphia area and has a preference for visual forms of expression. Educated at the Governor’s School for the Arts, he then earned his advanced degree from Temple University’s Tyler School of Art in drawing, painting, and sculpture. Cesario views Donkeys Around Town as an anomalistic artistic opportunity to participate in local and national history, and his donkey designs were inspired by the constraints of the donkey’s form in tandem with states symbols’ visual appeal. Cesario is painting the Tennessee and Kentucky donkeys.

Jonathan Mandell is a graphic and mosaic artist who attended University of Pennsylvania for his Master’s Degree after earning his Bachelor’s degree at Northwestern. Mandell wanted to participate in the Donkeys Around Town project after having another positive experience with a large creative collection project. More of Mandell’s work is on permanent display at the National Constitution Center. Mandell is painting the Connecticut and Delaware donkeys.

Lynette Shelley specializes in contemporary mixed media paintings with an animal theme, owing to her love of all that is untamed. She is marketing director and curator at JAM gallery, after making the life-changing decision to pursue a career in arts full-time in 2007. Shelley joined the Donkeys Around Town project because of its uniqueness, and as a challenge to herself, and she selected her state elements based on how compelling they were as design elements. Shelley is painting the Oklahoma and Missouri donkeys.

Jeleata Nicole grew up in a family of artists about an hour northwest of Philadelphia, in Eagleville. She was drawn into the city soon after graduation, and has been inspired to participate in Donkeys Around Town by the opportunity to work with other talented local artists. Nicole is painting the South Carolina and West Virginia donkeys.

Taylor Hickman is a graduate of Pennsylvania Academy of Fine Arts (PAFA) and is currently pursuing a psychology credential to become an art therapist at University of Pennsylvania. She works in paper craft and printmaking as well as painting. Hickman was inspired to participate in Donkeys Around Town to make art more accessible to underserved communities of potential artists. Hickman is painting the Virginia and Utah donkeys.