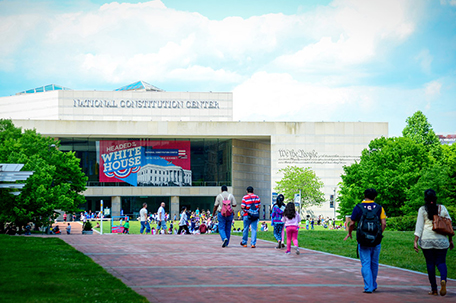 The Philadelphia 2016 Host Committee for the Democratic National Convention recently announced specifics of each PoliticalFest exhibit, showcasing American government and politics since the nation’s birth and inclusive of the diversity that has helped make up the country’s rich history. PoliticalFest, a festival celebrating United States history, politics, and the road to the White House, will highlight the contributions made by important figures and movements since the nation’s founding. These exhibits will be on display at each of the seven PoliticalFest locations and will create a fun, inclusive, and educational experience for residents, delegates and members of the media. PoliticalFest will run July 22-27th, open 10am-6pm daily.

“These exhibits embody the Host Committee’s commitment to inclusion throughout its Convention planning efforts and reflect the diversity of our nation and its history,” said former Gov. Ed Rendell, Chairman of the Philadelphia 2016 Host Committee. “We are excited to provide this unique opportunity for residents and Convention visitors to better understand our democratic process, and PoliticalFest will do just that.”

The Host Committee contracted LeapStarr Productions, a diverse-, woman- owned event production, design and fabrication company, to produce PoliticalFest. The LeapStarr team has been integral in the collection and design of the diverse, historical assets included in PoliticalFest.

A comprehensive list of all exhibits and programs that will take place at PoliticalFest can be found below:

Theme: Headed to the White House

The National Constitution Center will serve as the hub for PolticalFest. Attendees will have the opportunity to explore the Center’s feature exhibition “Headed to the White House,” as well as a mix of activities and Political Theater, which will include political feuds, political trivia, interviews and panel discussions. The Center’s permanent exhibits will also be incorporated into PoliticalFest, and C-SPAN’s educational bus will be featured outside the Center.

Theme: Politics and You!

Hall F of the Pennsylvania Convention Center will offer a variety of interactive experiences, including an Air Force One fuselage, an Oval Office replica, political fun and games for children in an area called Future Leaders Zone, and more.

The National Liberty Museum will be home to items and images from the presidential First Families, featuring the museum’s collection of White House china spanning back to George Washington’s time as president, special programs provided by the Rendell Center for Civic Engagement, dresses from First Ladies, and First Family photo exhibits.

The Philadelphia History Museum will showcase Philadelphia’s history with the presidency, including a photo opportunity for attendees to be a part of a whistle stop campaign tour.

The Philadelphia Library Company will feature writings, photographs and artifacts from its personal collection as well as from a variety of partner organizations.

The Historical Society of Pennsylvania will give attendees an opportunity to see their treasured collection of some of the nation’s founding documents.

The Heritage Center’s exhibit takes a deep dive into the 11 political conventions held in Philadelphia between 1848 and 2000.

Tickets for PoliticalFest may be purchased in person at the National Constitution Center and on the Host Committee’s website, www.phldnc.com.