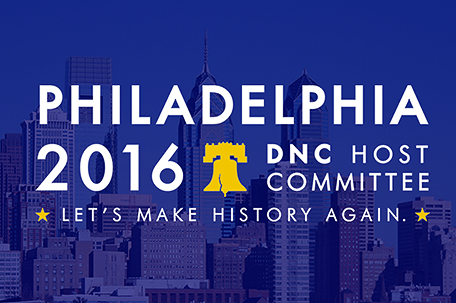 PHILADELPHIA, PA – The Philadelphia 2016 Host Committee for the Democratic National Convention today launched its blog and online press room in the second phase of its website refresh. These additional components will provide an enhanced user experience for website visitors, enabling them to learn about Philadelphia from individuals who work, live and study here as well as act as a one-stop for Host Committee news.

The blog and press room were developed by O3 World, a Philadelphia-based digital product design and development agency, which also worked with the Host Committee on the first phase of the website upgrades in February. O3 World continues to donate its services to the Host Committee for this phase of website enhancements.

“The Host Committee’s website is a resource of information and fun things to do in Philadelphia for both the 50,000 visitors coming here for the DNC as well as residents who will experience the excitement around town during Convention week,” said Kevin Washo, Executive Director of the Philadelphia 2016 Host Committee. “The additional enhancements to our website will help us better communicate with the public and provide a taste of the Philadelphia experience, and we continue to be grateful to O3 World for its support and services throughout the redesign process.”

“At O3 World, we strongly believe in collaborating for the greater good of the community and the city. Lending a hand with PHLDNC.com was a perfect opportunity to do that,” said Keith Scandone, Partner and CEO of O3 World. “We’re proud to be part of Philadelphia as the city hosts the DNC in 2016 and excited to play a small role in its success.”

Blog
The Host Committee’s blog will be comprised of posts depicting various aspects of the Philadelphia experience for an audience of delegates, members of the media, residents and visitors. The purpose of the blog is to act as a source of information about different sectors of the city, providing readers with a taste of Philadelphia, including:

Blog posts will be written once or twice a week by Host Committee staff and more than 20 local contributors who are knowledgeable in their fields and understand Philadelphia culture. These local bloggers include:

Swabreen Bakr is the host of Pour it Up on mynewphilly.com, a bi-weekly video news segment which highlights the best that Philly has to offer in cocktails, craft beer and coffee. On social media, she can be found on Twitter and Instagram @ssscorvus.

Caroline Bean is a social media strategist for Digitas Health who spent twelve years promoting Philadelphia as a visitor destination. She loves exploring the city — its riverside parks, pho restaurants and indie boutiques — on foot and thinks visitors should do so, too.

Conrad Benner is the Founder and Editor of StreetsDept.com, a Philly-based photo-blog that documents and celebrates street art, graffiti, and urban exploration in and around the city of Philadelphia. Conrad’s blog has been named one of the ‘Best Blogs for Travellers’ by The Guardian, and his photography highlighted by Mashable and Instagram as well as printed in Time Magazine and the Encyclopedia Britannica. The winner of the 2011 Philadelphia Geek Award for ‘Geek Culture Journalism,’ Conrad was named ‘Best Art Curator’ in 2014 by Philadelphia Magazine.

Ian Michael Crumm runs the self-named men’s lifestyle website IanMichaelCrumm.com where he shares the latest trends in style, grooming, technology and travel. He loves eating at his favorite Philly restaurants like (but not limited to) Sampan, Sancho Pistola’s and Parc. Follow his adventures on social media @ianmcrumm.

HughE Dillon is Philadelphia’s society and celebrity photographer with columns in Philly Magazine, Metro Philadelphia, Phillydotcom, PhillyChitChat and Philadelphia Business Journal. He was also recently hired as a freelance reporter for Metro Philly. He is a guest on Fox29 Philly and has a segment on BenFM95.7 focused on things to do around town.

Aileen Dreibelbis lives in Philadelphia with her husband and their 5-year-old daughter. Together, they love using Philadelphia’s many parks as their backyard and exploring awesome food spots that are great for both sophisticated palettes and families. Aileen is a social media strategist by trade and fills the rest of her time cooking, taking random classes, and seeking out great Instagram shots.

Aaron Horton is currently a web developer at his alma mater Temple University and previously spent 10 years at Visit Philadelphia working on thevisitphilly.com and uwishunu.com websites. A lifelong Philadelphian, Aaron resides in West Philadelphia with his wife and son.

Maori Karmael is director of Public Engagement at the Institute of Contemporary Art (@icaphiladelphia). She is also the founder/artistic director of BlackStar Film Festival (@blackstarfest). A native of Los Angeles, Maori has lived in Philadelphia for over 14 years and continues to be impressed by its ever-expanding food universe and cosmopolitan populace.

Cecily Kellogg is a non-native who has lived in Philadelphia for thirty years and adores her adopted hometown. Her favorite spot in the city is the fountain at Logan Square in spring. She’s a writer and content marketer happy to be living in South Philadelphia’s Point Breeze.

Laris Kreslins is a publisher, producer and connector currently working in the Marketing and Communications Department at Moore College of Art & Design and serving on the planning committee of Creative Mornings Philadelphia. Her favorite thing to do in Philadelphia is walk aimlessly around and find new things as well as visit her go-to spots Brickbat Books, Peddler Coffee, and Brewerytown Beats. When time allows, she plays music with the two bands of which she is a member, The Phone and Hamilton Calhoun.

Jonah Martinson came to Philadelphia from California, where he was born and raised, in 2011 as a Temple University student and never looked back. He is currently a social media community strategist at Digitas Health LifeBrands in Center City. During his free time, Jonah enjoys exploring Philadelphia with his boyfriend and their dog, Cooper, and seeking out Instagram-worthy brunch spots on the weekends.

Dan Pohlig is on the Corporate Communications team at Comcast as part of the Digital and Social Media Communications group. A lifelong Philadelphian, Dan lives in the Passyunk Square neighborhood in South Philadelphia and can tell you a lot about the best restaurants and bars in the city, many of which happen to be within a five-block radius of his house. You can follow him on Twitter and Instagram @danpohlig.

Ali Razzi is a junior at Temple University and an intern with the Philadelphia 2016 Host Committee. Her favorite thing to do in Philadelphia is try new restaurants and coffee shops.

Rakia Reynolds is the founder of Skai Blue Media, a multimedia communications agency with an all-star roster of lifestyle, technology, non-profit and fashion clients. Noted as an influencer in the creative business industry, Reynolds is sought after by companies to provide her expertise in creative development, branding and strategic communications. Reynolds was named one of the 25 tastemakers on Dell’s “Inspire 100,” a list of the most socially influential people in the country.

James R. Sanders is a fashion editor who contributes regularly to Vogue, Glamour, GQ, and The Huffington Post. He is also a celebrity wardrobe stylist and has worked with some of the biggest names in film and television. Though he works primarily in New York and Los Angeles, he lives in Philadelphia and loves the blend of city life and quiet suburban neighborhoods.

Dresden Schumaker is a parent, daughter, advocate, and student at Delaware County Community College where she is working towards getting a certificate in Web Development. For over ten years, Dresden has been sharing her single mother journey online on the award winning personal blog, CreatingMotherhood.com. Her writing has been featured or syndicated in ABC News, The Huffington Post, The Good Men Project, and BlogHer. Dresden and her six year old son love Philly pretzels, Philly transit, and Wawa. Recent transplants to the area, they have found Philadelphia to be welcoming, exciting, and full of fun things to do for families.

Alex Styer is an Account Executive at Bellevue Communications Group and has worked closely with the Philadelphia 2016 Host Committee since the bid phase for the 2016 Democratic National Convention. Alex came to Philadelphia to attend Drexel University in 2002 and never left, spending the better part of the last decade learning as much as there is to know about the city, its neighborhoods, history, inhabitants and culture. When not working or writing, Alex can be found playing trumpet in his folky-pop music band, Stella Ruze.

Joe Val, a native Philadelphian, enjoys showing his love for the city through photography, capturing the essence of Philadelphia in images of historical and modern architecture in the city’s diverse neighborhoods, its many festivals and the people within the city’s colorful street scenes.

Lynette Young is a marketing technology professional and SaaS software founder with a strong passion for all things vintage (style, not software.) She’s also a huge fan of Philly’s amazing rooftop restaurant scene.

Philadelphia 2016 Host Committee Gears Up for 2016