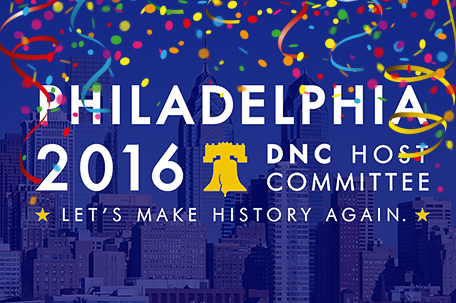 Each of these event planning contracts include a local and diverse-owned firm. All three party planners will be required to provide all necessary services, facilities, goods and supplies for each of the parties they are contracted to plan.

“These three parties will provide the first Convention week experiences in Philadelphia for our volunteers, delegates, and members of the media, and I am confident the three event planners will help us put together a series of unforgettable events,” said Kevin Washo, Executive Director of the Philadelphia 2016 Host Committee.  “We are proud to partner with these event planners to showcase locally- and minority-owned businesses that highlight the rich and diverse nature of Philadelphia and the region.”

The event planners for each of the three parties will be responsible for:

• Identifying companies to provide services such as food, beverage, catering and similar needs;

• Setup, including tenting, furnishings, tables, chairs, serving equipment, linens, and other items as needed in conjunction with food and beverage service;

• Overseeing and implementing load-in and load-out of all temporary structures/tenting, facilities, equipment and supplies;

• Arranging for entertainment and guest activities, including staging, audio and lighting as needed as well as production effects and signage;

• Creating and overseeing run-of-show and rundown, managing all aspects of entertainment and program onsite, and serve as principal contact with the event venue.

ACCESS Philadelphia and J.M. Best Entertainment will be the Host Committee’s official event producers of the Volunteer Appreciation Party.

J.M. Best Entertainment, Inc., is headed by John M. Best, a two-time Emmy Award winner, and specializes in large-scale live television and event production.  He has produced some of the biggest events in large cities around the country, including the 6ABC Dunkin Donuts Thanksgiving Day Parade, The Marian Anderson Award and Welcome America’s 4th of July Parade in Philadelphia. The diverse company also produces many special events and fundraisers for the LGBT community.

Cashman & Associates and AEC Partners will be the Host Committee’s official event producers of the Media Party.

Cashman & Associates, a woman-owned firm based in Philadelphia, has over 15 years of experience developing and producing events locally, nationally, and internationally.  In Philadelphia, Cashman & Associates, led by Nicole Cashman, served as the Associate Producer of the Wawa Welcome America Festival from 2011 to 2013, produced the Mayor’s Independence Day Reception each year from 2009 to 2015, and was responsible for the three-day Taste of Philadelphia.

AEC Partners, a minority-owned and woman-owned event management firm based in Philadelphia, specializes in large-scale events for corporations, nonprofit entities, and small businesses. The firm, founded by Kathryn Epps Roberson and Sue Jacquette, has vast event-planning experience, including the planning and execution of the Big Brothers Big Sisters of America National Conference.

Perfect Events, Inc. and Stockton & Partners will be the Host Committee’s official event producers of the Delegate Welcome Party.

The Host Committee selected these companies as the official Convention party producers following a Request for Qualifications process that began in February.