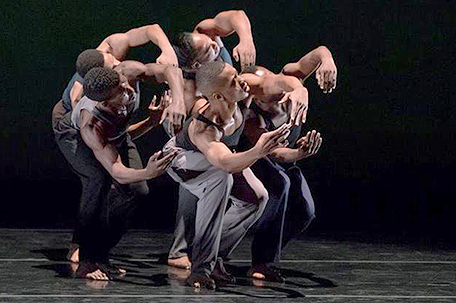 The arts were on full display Easter weekend as the world-renowned Philadelphia Dance Company, better known as Philadanco, returned to the Kimmel Center for their showcase titled “Black Steam…It’s Hot” — and my oh my, was it!

Four talented choreographers came together to bring “Black Steam” to fruition. The production uses dance to look at how Black and Brown people manage to overcome the obstacles thrown at them to find love, and success through perseverance.. Watching the dancers writhe and contort themselves into physical displays of love, joy, pain, heartbreak and ecstasy was absolutely mind-altering. The dancers moved from a standing to lying position, while maintaining their poise, grace, and elegance, a celebration in itself.

The opening dance sequence titled “Box Out” was a world premiere performance. Choreographed by Dawn Marie Bazemore, the dancers were dressed in attire reminiscent of the Harlem Renaissance and the Industrial Revolution, courtesy of costume designer Anna-Alisa Belous.  The dance sequence for The Industrial Revolution was called “Glass Ceiling” and was performed by all women and one man. The women were dressed like Rosie the Riveter; and a man who has all the friends in the world when he has money, but finds he’s alone when he’s low on cash.

The second sequence, entitled “Sweet Agony,” was set to a collection of soulful ballads sung by the late legendary R&B crooner Teddy Pendergrass. The movement started slow, but continued to build to the climax of “Only You” as dancers swayed and rocked their bodies to perfection.  Gene Hill Sagan was behind the choreography for this sequence, which was a beautiful personification of sweet agony as the dancers and music combined to move into all kinds of awe-inspiring figures. Frankie Fehr’s costumes  displayed the sense of melancholy through somber blues and blacks for the dancers’ attire.

After intermission, the heavy, thought-provoking portion of the night began with the sequence “New Fruit”. The curtain opened with image of a body hanging from a rope as the audience hears Nina Simone’s mournful performance of “Strange Fruit”.  Christopher L. Huggins choreographed this series and segued from this scene into one of the current dismay with “This Bitter Land.” From bare backs to colorful hoodies, the message was extremely powerful and sincerely executed.

This world-premiere piece is one that all should witness. It’s too good to remain in Philly! Costume and lighting credits belong to Natasha Guruleva and Clifton Taylor, as they were an integral part of the production. Watching the background scenes change from illuminated hanging figures to jail cells gave the entire audience pause.

The finale was centered in the current day, as dancers wowed the crowd to the music of Prince and Earth, Wind, and Fire.  My interpretation was that this was in tribute to the Great Purple One, who passed away a year ago this time (April 21), as well as an acknowledgement of the phenomenal Maurice White, who died nearly three months earlier on February 4th, 2016. The inclusion of music from these late performers provided an opportunity for the dancers to celebrate the contributions of both incredible icons. They nearly shook the audience out of their seats! The troupe was dressed in a beautiful array of bright clothing that even the color spectrum would envy, as they danced to Prince’s tantalizing guitar riffs and EWF’s soul-swaying sounds. Overall, this show was quite the spectacle, and founder Joan Myers-Brown is quite the woman for seeing such vision and running with it.